USD/JPY trades at its highest level since 2018 as it rallies to a fresh yearly high (113.41), and recent developments in the Relative Strength Index (RSI) indicate a further appreciation in the exchange rate as it pushes into overbought territory for the first time since the first quarter of 2021.

USD/JPY extends the series of higher highs and lows from last week even though the US bond market is offline in observance of Columbus Day, and current market conditions may keep the exchange rate afloat as speculation for an imminent shift in Federal Reserve policy lifts US yields.

During an interview with CBS, San Francisco President Mary Daly, who votes on the Federal Open Market Committee (FOMC) this year, discussed the disruptions caused by the Delta variant, with the official going onto say that the labor market “is going to have these ups and downs” as long as COVID-19 persists.

The comments suggest the weaker-than-expected US Non-Farm Payrolls report (NFP) will do little to hold back the Fed from scaling back monetary support as Daly acknowledged that the stickiness in inflation continues to be drive by the supply-side disruptions, and key developments coming out later this week may fuel a larger advance in USD/JPY as the update to the Consumer Price Index (CPI) is expected to hold steady in September.

At the same time, the FOMC Minutes may generate a bullish reaction in the US Dollar as the central bank reveals a tentative exit strategy in tapering its purchases of Treasury securities and mortgage-backed securities (MBS), and the deviating paths for monetary policy may keep USD/JPY afloat throughout the remainder of the year as the Bank of Japan (BoJ) remains reluctant to switch gears.

In turn, USD/JPY may continue to trade to fresh yearly highs ahead of the next FOMC interest rate decision on November 3, but a further appreciation in the exchange rate may fuel the tilt in retail sentiment like the behavior seen earlier this year. 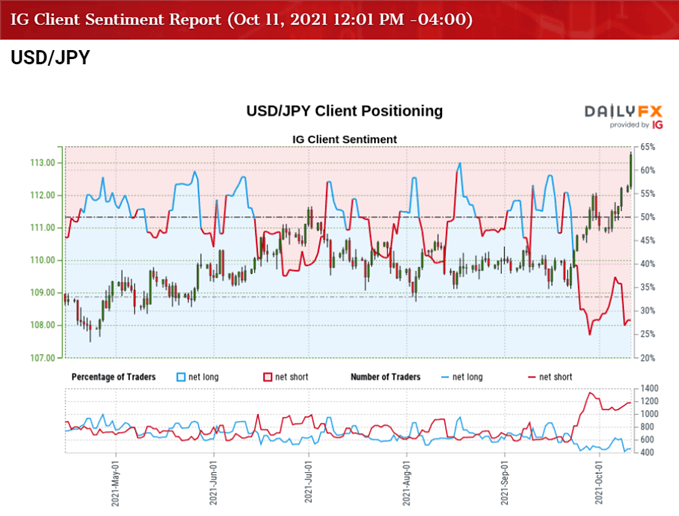 The IG Client Sentiment report shows only 30.67% of traders are currently net-long USD/JPY, with the ratio of traders short to long standing at 2.26 to 1.

The number of traders net-long is 18.87% higher than yesterday and 4.70% lower from last week, while the number of traders net-short is 4.03% higher than yesterday and 14.19% higher from last week. The decline in net-long position could be a function of profit-taking behavior as USD/JPY trades to a fresh yearly high (113.41), while the rise in net-short interest has fueled the crowding behavior as 35.31% of traders were net-long the pair last week.

With that said, current market conditions may keep USD/JPY afloat as speculation for an imminent shift in Fed policy lifts US yields, and the Relative Strength Index (RSI) may show the bullish momentum gathering pace over the coming days as it pushes into overbought territory for the first time since the first quarter of this year.