NZD/USD retraces the decline from earlier this as the weaker-than-expected US Non-Farm Payrolls (NFP) report rattles speculation for an imminent shift in Federal Reserve policy, and the exchange rate may stage a larger recovery over the coming days if it clears the opening range for October.

NZD/USD retraces the decline following the dovish rate hike from the Reserve Bank of New Zealand (RBNZ) as the US economy adds 194K jobs in September versus expectations for a 500K rise.

A deeper look at the report shows the Unemployment Rate narrowing to 4.8% from 5.1% in August as the Participation Rate slipped to 61.6% from 61.7% during the same period, and the dismal developments may keep the Federal Open Market Committee (FOMC) on the sidelines as the central bank carries out an outcome based approach for monetary policy.

In turn, NZD/USD may stage a larger recovery ahead of the next FOMC interest rate decision on November 3 as signs of a less robust recovery could push the central bank to delay normalizing monetary policy, and a larger rebound in the exchange rate may fuel the recent flip in retail sentiment like the behavior seen earlier this year. 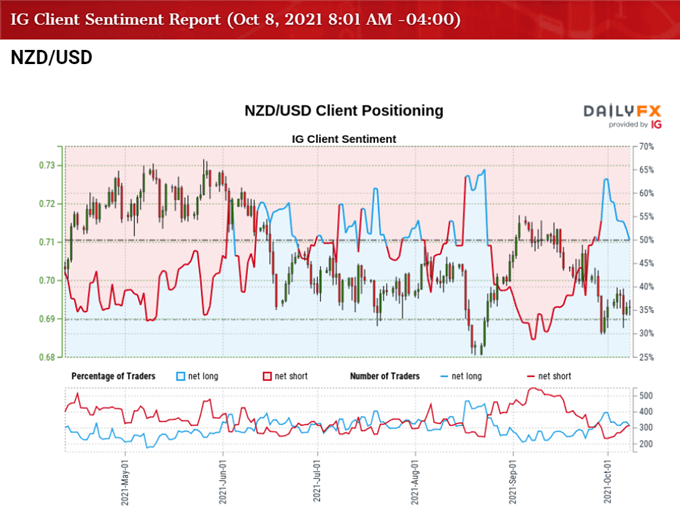 The IG Client Sentiment report shows 48.35% of traders are currently net-long NZD/USD, with the ratio of traders short to long standing at 1.07 to 1.

The number of traders net-long is 12.25% lower than yesterday and 21.83% lower from last week, while the number of traders net-short is 5.11% higher than yesterday and 35.39% higher from last week. The decline in net-long interest comes as NZD/USD retraces the decline from earlier this week, while the surge in net-short position has fueled the flip in retail sentiment as 55.66% of traders were net-long the pair earlier this week.

With that said, the rebound from the August low (0.6805) may turn out to be a correction in the broader trend as the mixed data prints are unlike to derail the FOMC from tapering its purchases of Treasury securities and mortgage-backed securities (MBS), but the exchange rate may stage a larger recovery over the coming days if it manages to clear the opening range for October.