EUR/USD bounces back from the session low (1.1581) following the kneejerk reaction to the better-than-expected ISM Non-Manufacturing survey, but looming data prints coming out of the US may undermine the recent rebound in the exchange rate as the Non-Farm Payrolls (NFP) report is anticipated to show a pickup in job growth.

The opening range for October raises the scope for a near-term recovery in EUR/USD as the advance from the first day of the month pulls the Relative Strength Index (RSI) out of oversold territory, with a textbook buy signal taking shape as the oscillator climbs back above 30.

It remains to be seen if the account of the European Central Bank’s (ECB) September meeting will influence EUR/USD as the Governing Council plans to carry out “a moderately lower pace of net asset purchases under the pandemic emergency purchase programme (PEPP) than in the previous two quarters,” and more of the same from President Christine Lagarde and Co. may generate a limited reaction as the central bank relies on its emergency measures to achieve its one and only mandate for price stability.

As a result, the update to the US NFP report may sway the near-term outlook for EUR/USD the economy is anticipated to add 473K jobs in September, and a positive development may push the Federal Open Market Committee (FOMC) to switch gears at its next interest rate decision on November 3 as the “Committee judges that a moderation in the pace of asset purchases may soon be warranted.”

Until then, speculation for an imminent change in Federal Reserve policy may continue to drag on EUR/USD as the Summary of Economic Projections (SEP) show a forward shift in the interest rate dot plot, but a further decline in the exchange rate may fuel the tilt in retail sentiment like the behavior seen earlier this year. 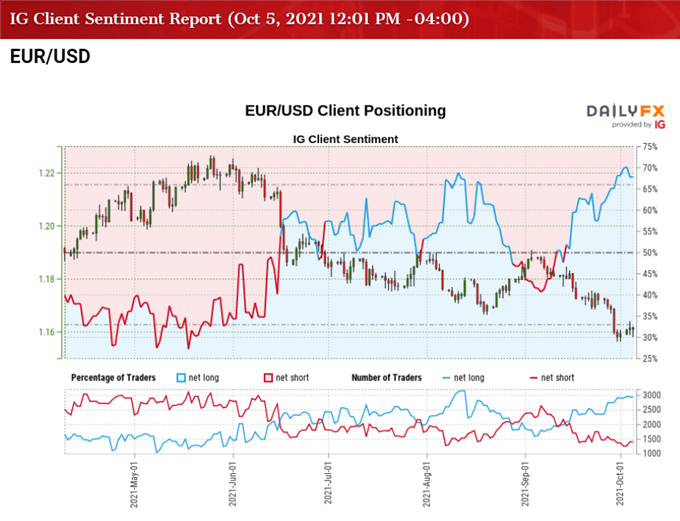 The IG Client Sentiment report shows 65.59% of traders are currently net-long EUR/USD, with the ratio of traders long to short standing at 1.91 to 1.

The number of traders net-long is 1.10% lower than yesterday and 5.50% higher from last week, while the number of traders net-short is 8.23% higher than yesterday and 2.24% higher from last week. The rise in net-long position has fueled the crowding behavior as 64.88% of traders were net-long EUR/USD last week, wile the rise in net-short position comes as the exchange rate struggles to extend the series of higher highs and lows from the start of the month.

With that said, EUR/USD may stage a larger rebound over the coming days as the Relative Strength Index (RSI) indicates a textbook buy signal, but the recent rebound in the exchange rate may turn out to be a correction in the broader trend as it trades to fresh yearly lows in the second half of 2021.