EUR/USD trades to a fresh monthly low (1.1672) as it carves a fresh series of lower highs and lows, but the exchange rate may continue to defend the yearly low (1.1664) as the update to the Euro Area Consumer Price Index (CPI) is anticipated to show a pickup in inflation.

EUR/USD struggles to hold its ground following the kneejerk reaction to the Federal Reserve interest rate decision, and speculation for an imminent shift in US monetary policy may keep the exchange rate under pressure as the European Central Bank (ECB) relies on its non-standard tools to support the monetary union.

Recent remarks from ECB President Christine Lagarde suggest the Governing Council is in no rush to remove its emergency measures as officials brace for “a phase of temporary inflation linked to reopening,” with the central bank head going onto say that “we still need an accommodative monetary policy stance to exit the pandemic safely and bring inflation sustainably back to 2%” while speaking at the ECB Forum on Central Banking.

In turn, Lagarde argues that “monetary policy should normally ‘look through’ temporary supply-driven inflation, so long as inflation expectations remain anchored,” and it seems as though the ECB will continue to strike a dovish tone at its next rate decision on October 28 as “the key challenge is to ensure that we do not overreact to transitory supply shocks that have no bearing on the medium term.”

However, the update to the Euro Area Consumer Price Index (CPI) may put pressure on the ECB to adjust the forward guidance for monetary policy as the headline reading for inflation is anticipated to increase for the third consecutive month, while the core CPI is expected to widen to 1.9% from 1.6% per annum in August.

As a result, signs of faster inflation may spark a bullish reaction in the Euro as the ECB plans to carry out “a moderately lower pace of net asset purchases under the pandemic emergency purchase programme (PEPP) than in the previous two quarters,” but a further decline in EUR/USD may fuel the tilt in retail sentiment like the behavior seen earlier this year. 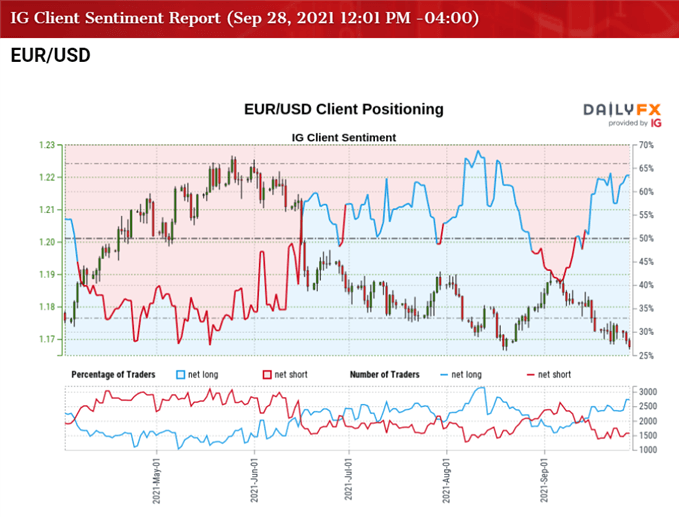 The number of traders net-long is 1.60% higher than yesterday and 8.31% higher from last week, while the number of traders net-short is 1.69% lower than yesterday and 6.76% lower from last week. The rise in net-long interest has fueled the tilt in retail sentiment as 60.27% of traders were net-long EUR/USD last week, while the decline in net-short position could be a function of profit-taking behavior as the exchange rate trades to a fresh monthly low (1.1672).

With that said, recent price action raises the scope for a further decline in EUR/USD as it carves a fresh series of lower highs and lows, butthe exchange rate may continue to defend the yearly low (1.1664) if the Euro Area CPI report indicates a more broad based pickup in price growth.