AUD/USD appears to be stuck in a narrow range following the kneejerk reaction to the Federal Reserve interest rate decision, but lack of momentum to climb back above the 50-Day SMA (0.7321) may push the exchange rate towards the monthly low (0.7220) as the Federal Open Market Committee (FOMC) lays out a tentative exit strategy.

AUD/USD consolidates within last week’s range as the FOMC retains the current course for monetary policy, and the exchange rate may continue to track sideways over the remainder of the month amid the limited reaction to the better-than-expected US Durable Goods Orders report.

It remains to be seen if the key US data prints on tap for later this week will influence AUD/USD as New York Fed President John Williams, a permanent voting member on the FOMC, points out that there has “been very good progress toward maximum employment,” with the official going onto say that “a moderation in the pace of asset purchases may soon be warranted” while speaking at the Economic Club of New York.

The comments suggest the FOMC is preparing to shift gears later this year as the updated Summary of Economic Projections (SEP) reflects an improved outlook for the US economy, and AUD/USD may face headwinds ahead of the next Fed interest rate decision on November 3 as the Reserve Bank of Australia (RBA) plans to “purchase government securities at the rate of $4 billion a week and to continue the purchases at this rate until at least mid February 2022.”

Until then, the RBA’s wait-and-see approach for monetary policy may drag on the Australian Dollar as Governor Philip Lowe and Co. look poised to retain the current policy at their next meeting on October 5, but the range bound price action in AUD/USD may continue to ease the tilt in retail sentiment like the behavior seen earlier this year. 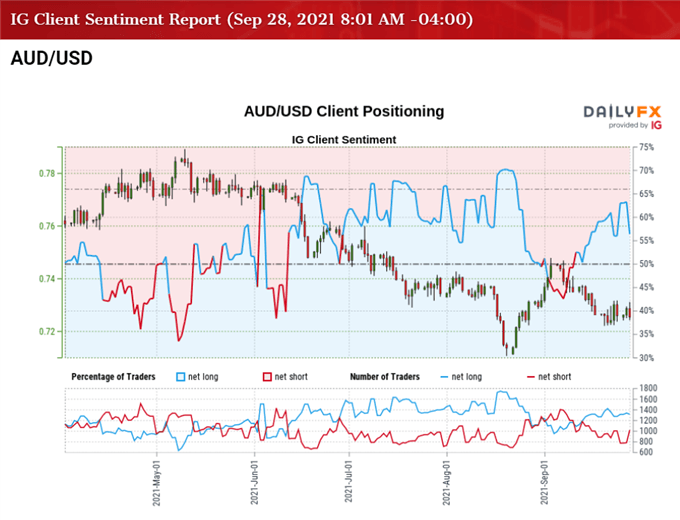 The IG Client Sentiment report shows 58.20% of traders are currently net-long AUD/USD, with the ratio of traders long to short standing at 1.39 to 1.

The number of traders net-long is 1.98% lower than yesterday and 6.43% lower from last week, while the number of traders net-short is 2.45% higher than yesterday and 5.23% lower from last week. The decline in net-long position has alleviate the tilt in retail sentiment as 60.41% of traders were net-long AUD/USD last week, while the decline in net-short position comes as the exchange rate consolidates within last week’s range.

With that said, the rebound from the August low (0.7106) may turn out to be a correction in the broader trend amid the deviating paths between the RBA and FOMC, and the string of failed attempts to push back above the 50-Day SMA (0.7321) may push the exchange rate towards the monthly low (0.7220) as