USD/JPY gives back the advance from the start of the week amid a larger-than-expected downtick in the US Consumer Price Index (CPI), but the market reaction may end up being short lived as longer-dated US Treasury yields remain afloat.

USD/JPY struggles to extend the recent series of higher highs and lows as the US CPI slows for the first time in 2021, with the headline reading for inflation narrowing to 5.3% from 5.4% annum in July.

At the same time, the core CPI slipped to 4.0% from 4.3% during the same period to mark the lowest reading since May, but the fresh data prints may encourage the Federal Reserve to gradually scale back monetary support as it reinforces the central bank’s expectation for a transitory rise in inflation.

As a result, the Federal Open Market Committee (FOMC) may alter the forward guidance at its next interest rate decision on September 22 as Chairman Jerome Powell acknowledgedthat the central bank could shift gears“if the economy evolved broadly as anticipated,” and it remains to be seen if Fed officials will implement material changes to the Summary of Economic Projections (SEP) as the committee warns that “rising COVID-19 cases associated with the spread of the Delta variant could cause delays in returning to work and school and so damp the economic recovery.”

Until then, USD/JPY may continue to track the August range as speculation for a looming shift in Fed policy keeps US yields afloat, but a further consolidation in the exchange rate may fuel swings in retail sentiment like the behavior seen during the previous month. 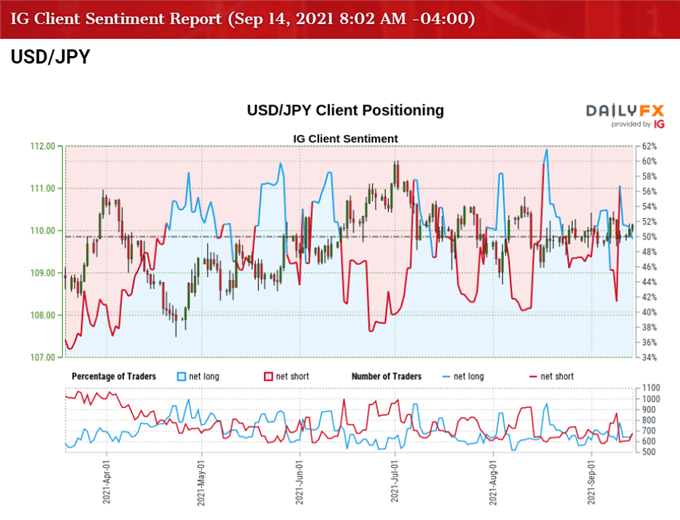 The IG Client Sentiment report shows 49.85% of traders are currently net-long USD/JPY, with the ratio of traders short to long standing at 1.01 to 1.

The number of traders net-long is unchanged than yesterday and 5.77% lower from last week, while the number of traders net-short is 2.22% higher than yesterday and 1.17% higher from last week. The decline in net-long position comes as USD/JPY struggles to struggles to extend the recent series of higher highs and lows, while the rise in net-short interest has done little to fuel the crowding behavior as 42.89% of traders were net-long the pair last week.

With that said, USD/JPY may face range-bound conditions ahead of the FOMC rate decision amid the mixed data prints coming out of the US economy, but speculation for a looming shift in Fed policy may keep the exchange rate as well as Treasury yields afloat as Chairman Powell and Co. show a greater willingness to switch gears.