EUR/USD extends the rebound from a fresh monthly low (1.1770) amid the larger-than-expected slowdown in the US Consumer Price Index (CPI), but recent price action casts a bearish outlook for the exchange rate as it snaps the opening range for September.

EUR/USD appears to have reversed course after failing to clear the July high (1.1909), with the exchange rate dipping below the 50-Day SMA (1.1799) at the start of the week even as the European Central Bank (ECB) plans to carry out the pandemic emergency purchase programme (PEPP) at a “moderately lower pace.”

It seems as though the ECB is in no rush to normalize monetary policy as the central bank reiterates that the PEPP will operate “with a total envelope of €1,850 billion until at least the end of March 2022 and, in any case, until it judges that the coronavirus crisis phase is over,” and the Euro may face headwinds ahead of the Federal Open Market Committee (FOMC) interest rate decision on September 22 as Chairman Jerome Powell and Co. show a greater willingness to switch gears.

Until then, speculation surrounding the ECB and FOMC may sway EUR/USD as both central banks maintain an outcome-based approach for monetary policy, but a further decline in the exchange rate may fuel the recent flip in retail sentiment like the behavior seen earlier this year. 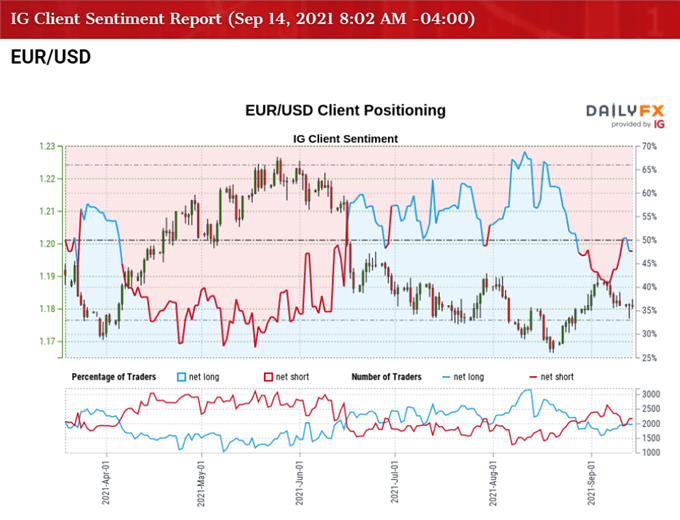 The IG Client Sentiment report shows 50.70% of traders are currently net-long EUR/USD, with the ratio of traders long to short standing at 1.03 to 1.

With that said, EUR/USD may struggle to hold above the 50-Day SMA (1.1799) amid the failed attempt to clear the July high (1.1909), and the rebound from the August low (1.1664) may turn out to be a correction in the broader trend as the exchange rate trades to fresh yearly lows in the second half of 2021.