AUD/USD bounces back ahead of the monthly low (0.7308) to defend the opening range for September, but the update to Australia’s Employment report may drag on the exchange rate as job growth is expected to contract for the second time in 2021.

AUD/USD manages to trade above the 50-Day SMA (0.7356) as it attempts to retrace the decline from the previous week, but the negative slope in the moving average casts a bearish outlook for the exchange rate as it trades to fresh yearly lows in the second half of the year.

Looking ahead, fresh data prints coming out of Australia may drag on AUD/USD as employment is projected to fall 90.0K in August, while the jobless rate is expected to widen to 4.9% from 4.6% during the same period. In response, the Reserve Bank of Australia (RBA) may retain the current course for monetary policy as the central bank warns that “the Delta outbreak is expected to delay, but not derail, the recovery,” and Governor Philip Lowe and Co. may stick to the same script at its next interest rate decision on October 5 as “the Board is committed to maintaining highly supportive monetary conditions to achieve a return to full employment in Australia and inflation consistent with the target.”

Until then, signs of a slowing recovery in Australia may weigh on AUD/USD as the RBA plans to carry out its government bond purchase program at a pace of A$4B a week “until at least mid February 2022,” but a further decline in the exchange rate may fuel the recent flip in retail sentiment like the behavior seen earlier this year. 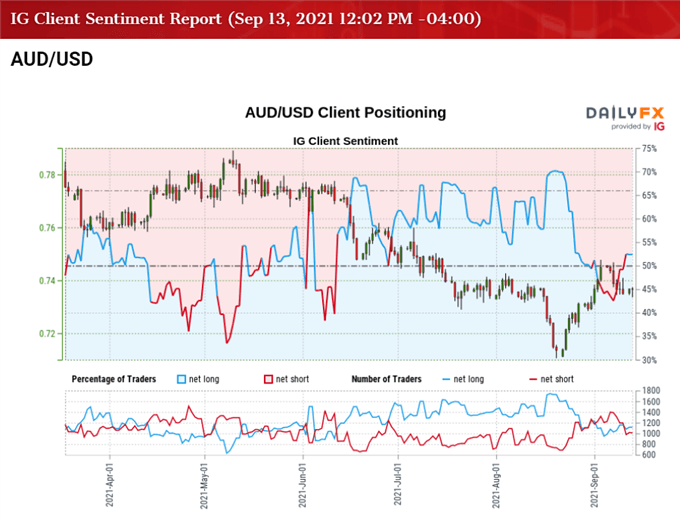 The IG Client Sentiment report shows 51.12% of traders are currently net-long AUD/USD, with the ratio of traders long to short standing at 1.05 to 1.

With that said, AUD/USD may face range bound conditions ahead of Australia’s Employment report as it defends the opening range for September, but the rebound from the August low (0.7106) may turn out to be a correction in the broader trend as it the exchange rate slips to fresh yearly lows in the second half of the year.