NZD/USD appears to be on track to test the monthly high (0.7170) as it trades back above the 200-Day SMA (0.7115), and the exchange rate may threaten the opening range for September ahead of New Zealand’s Gross Domestic Product (GDP) report as the economy is expected to grow at a record pace.

NZD/USD snaps the series of lower highs and lows from the start of the week on the back of US Dollar weakness, and the exchange rate may stage a larger recovery over the coming days as it trades above the 200-Day SMA (0.7115) for the first time since July.

Looking ahead, the update to New Zealand’s GDP report may trigger a bullish reaction in NZD/USD as the economy is expected to grow 16.4% per annum in the second quarter, which would mark the fastest pace of growth since recordkeeping began in 1987, and a positive development may encourage the Reserve Bank of New Zealand (RBNZ) to lift the official cash rate (OCR) off of the record low as “the Committee agreed they are confident of meeting their inflation and employment remit with less need for the existing level of monetary stimulus.”

As a result, the New Zealand Dollar may stage a larger recovery against its US counterpart as RBNZ Assistant Governor Christian Hawkesby reveals that “a 50 basis point move was definitely on the table” at their meeting in August, but a further appreciation in the exchange rate may fuel the recent flip in retail sentiment like the behavior seen earlier this year. 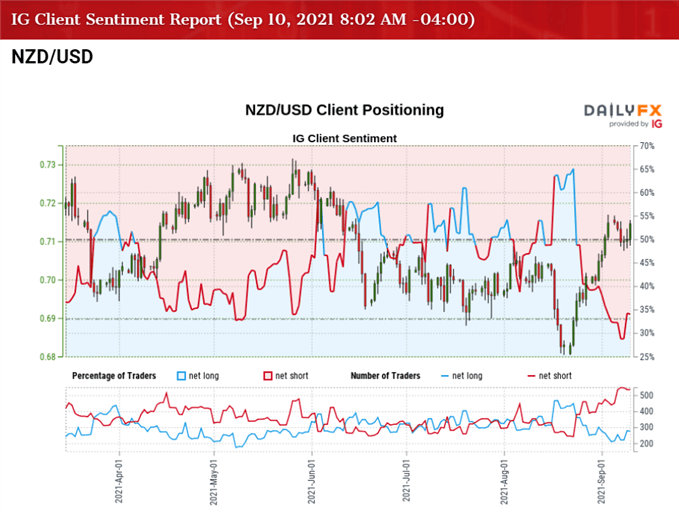 The IG Client Sentiment report shows 36.38% of traders are currently net-long NZD/USD, with the ratio of traders short to long standing at 1.75 to 1.

The number of traders net-long is 8.30% higher than yesterday and 14.34% higher from last week, while the number of traders net-short is 12.39% lower than yesterday and 3.51% higher from last week. The jump in net-long interest has helped to alleviate the crowding behavior as only 35.25% of traders were net-long NZD/USD last week, while the rise in net-short position comes even as the exchange rate appears to be on track to test the monthly high (0.7170).

With that said, NZD/USD may threaten the opening range for September ahead of New Zealand’s GDP report as it trades back above the 200-Day SMA (0.7115),but the advance from the August low (0.6805) may turn out to be a correction in the broader trend as the exchange rate trades to fresh yearly lows in the second half of 2021.