USD/JPY struggles to extend the series of higher highs and lows from the start of the week amid the pullback in longer-dated US Treasury yields, but the exchange rate may hold above the 50-Day SMA (110.02) ahead of the next Federal Reserve meeting as it clears the opening range for September.

USD/JPY pulls back from a fresh monthly high (110.45) to largely mimic the price action in US yields, and the exchange rate may continue to consolidate as the weaker-than-expected Non-Fam Payrolls (NFP) report dampens speculation for an imminent shift in Fed policy.

The slowdown in US job growth may keep the Federal Open Market Committee (FOMC) on the sidelines as Chairman Jerome Powell acknowledges that “we have much ground to cover to reach maximum employment,” but it seems as though the central bank is on track to scale back monetary support as St Louis Fed President James Bullard argues that “there is plenty of demand for workers and there are more job openings than there are unemployed workers.”

During an interview with the Financial Times, President Bullard, who votes on the FOMC in 2022, emphasized that “you have to be prepared for twists and turns” as COVID-19 persists, with the official going onto say that “the big picture is that the taper will get going this year and will end sometime by the first half of next year.”

The comments suggest the FOMC is preparing to switch gears as Fed officials forecast two rate hikes for 2023, and it remains to be seen if the central bank will deploy an exit strategy at its next interest rate decision on September 22 with only two more meetings on tap for the remainder of the year.

Until then, swings in longer-dated Treasury yields may sway USD/JPY amid the mixed data prints coming out of the US economy, but a further advance in the exchange rate may fuel the recent flipin retail sentiment like the behavior seen earlier this year. 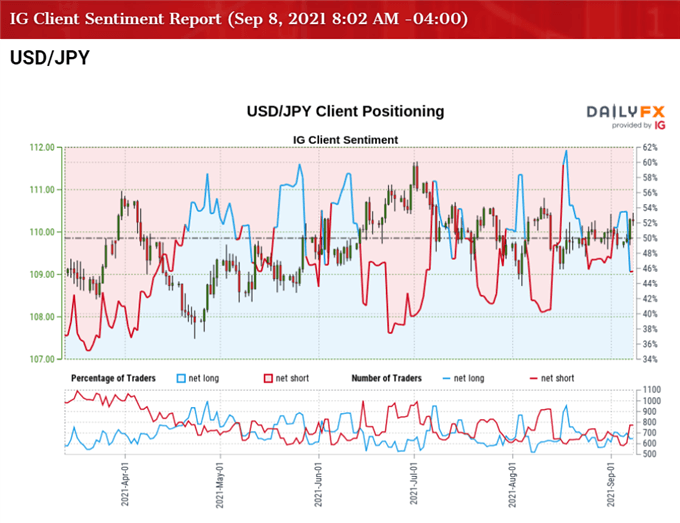 The IG Client Sentiment report shows 42.89% of traders are current net-long USD/JPY, with the ratio of traders short to long standing at 1.33 to 1.

With that said, speculation for a looming shift in Fed policy may keep longer-dated US yields afloat ahead of the next rate decision, and USD/JPY may continue to hold above the 50-Day SMA (110.02) as it clears the opening range for September.