EUR/USD tests the 50-Day SMA (1.1802) as it extends the decline from earlier this week, and the European Central Bank (ECB) meeting may do little to shore up the Euro as the Governing Council appears to be on track to retain the current policy.

EUR/USD approaches the monthly low (1.1794) as it gives back the reaction to the US Non-Farm Payrolls (NFP) report, and more of the same from the ECB may produce headwinds for the Euro if the Governing Council stays on track conduct the pandemic emergency purchase programme (PEPP) “at a significantly higher pace than during the first months of the year.”

However, recent remarks from President Christine Lagarde suggest the central bank is preparing to alter the forward guidance for monetary policy as the Euro Area “will be back to where we were pre-pandemic at the end of the year,” with the central bank head going onto say that “it’s no longer a question of massive support, it’s going to be a question of focused, targeted support in those sectors that have been badly hurt” while speaking at an event hosted by TIME.

In turn, the ECB rate decision may spark a bullish reaction in EUR/USD if the Governing Council unveils a tentative exit strategy, but a recovery in the exchange rate may fuel the recent flip in retail sentiment like the behavior seen earlier this year. 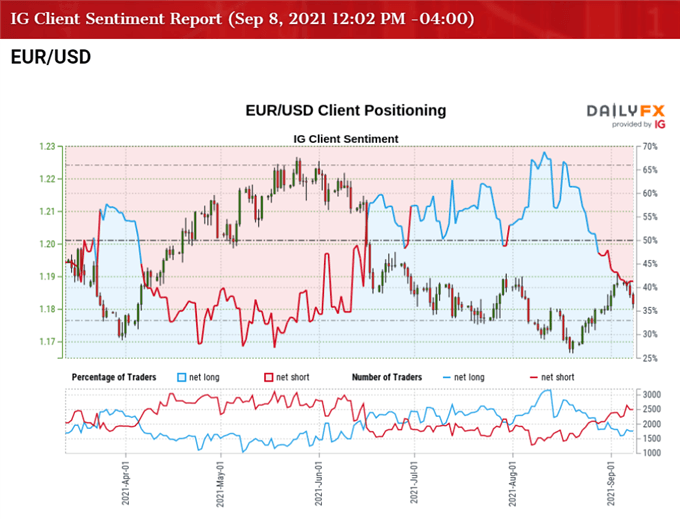 The IG Client Sentiment report shows 42.07% of traders are currently net-long EUR/USD, with the ratio of traders short to long standing at 1.38 to 1.

The number of traders net-long is 6.01% higher than yesterday and 5.71% lower from last week, while the number of traders net-short is 6.01% lower than yesterday and 7.29% higher from last week. The decline in net-long position comes as EUR/USD extends the decline from earlier this week, while the rise in net-short interest as fueled the recent flip in retail sentiment as 49.17% of traders were net-long the pair last week.

With that said, a material shift in the ECB’s forward guidance may spark a bullish reaction in EUR/USD, but the exchange rate may struggle to retain the opening range for September if President Lagarde and Co. retain the current path for monetary policy.