NZD/USD takes out the July high (0.7105) as it stages a five-day rally, and the update to the US Non-Farm Payrolls (NFP) report may sway the near-term outlook for the exchange rate as the Federal Reserve carries out an outcome-based approach for monetary policy.

NZD/USD tests the 200-Day SMA (0.7112) for the first time since July as it extends the series of higher highs and lows from earlier this week, and the reaction to the weaker-than-expected ADP Employment survey may act as a guide for the NFP report as Fed Chairman Jerome Powellinsists that “we have much ground to cover to reach maximum employment.”

A dismal development is likely to produce a bearish reaction in the US Dollar as saps speculation for an imminent shift in Fed policy, while a better-than-expected NFP report may undermine the recent rally in NZD/USD as it puts pressure on the Federal Open Market Committee (FOMC) to deploy an exit strategy sooner rather than later.

As a result, it remains to be seen if the FOMC will switch gears ahead of its New Zealand counterpart as Reserve Bank of New Zealand (RBNZ) Assistant Governor Christian Hawkesby reveals that “a 50 basis point move was definitely on the table” at their meeting earlier this month, and fresh data prints coming out of the US may continue to produce headwinds for the Greenback amid signs of a less robust recovery.

In turn, NZD/USD may stage a larger advance ahead of the next Fed rate decision on September 22 as it takes out the July high (0.7105), but a further appreciation in the exchange rate may fuel the flip in retail sentiment like the behavior seen earlier this year. 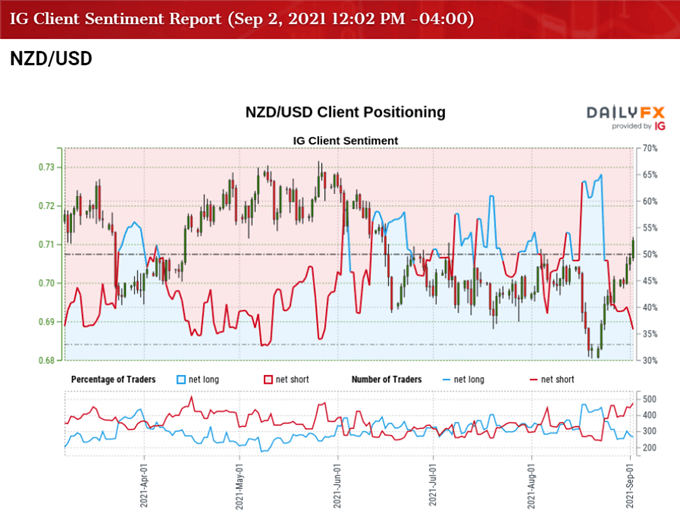 The IG Client Sentiment report shows 35.25% of traders are currently net-long NZD/USD, with the ratio of traders short to long standing at 1.84 to 1.

The number of traders net-long is 6.88% lower than yesterday and 21.41% lower from last week, while the number of traders net-short is 3.28% higher than yesterday and 7.03% higher from last week. The decline in net-long interest could be a function of profit-taking behavior as NZD/USD tests the 200-Day SMA (0.7112) for the first time since July, while the rise in net-short position has helped to fuel the recent flip in retail sentiment as 42.08% of traders were net-long the pair last week.

With that said, the break above the July high (0.7105) may generate a large recovery in NZD/USD as it extends the series of higher highs and lows from earlier this week, but the advance from the August low (0.6805) may turn out to be a correction in the broader trend as the exchange rate trades to fresh yearly lows in the second half of 2021.