NZD/USD extends the rebound from the fresh yearly low (0.6805) as the Reserve Bank of New Zealand (RBNZ) warns of a looming shift in monetary policy, but headlines coming out of the Kansas City Fed Economic Symposium appear to be dragging on the exchange rate as Federal Reserve officials show a greater willingness to scale back monetary support.

NZD/USD has come up against the 50-Day SMA (0.6982) as RBNZ Assistant Governor Christian Hawkesby reveals that “a 50 basis point move was definitely on the table” at its meeting earlier this month, with the official going onto say that “every meeting is a live meeting” during an interview with Bloomberg News.

The comments suggest Governor Adrian Orr and Co. will deliver a rate-hike at its next interest rate decision on October 6 with only two more meetings left for the remainder of the year, and speculation for a looming shift in RBNZ policy may generate a larger correction in NZD/USD as the central bank prepares to lift the official cash rate (OCR) off of the record-low.

At the same time, the Federal Reserve appears to be on track to switch gears as Kansas City Fed President Esther George, who votes on the Federal Open Market Committee (FOMC) in 2022, insists that “it is time to begin to ease back from the amount of accommodation that's going into the economy,” with the official calling for a “sooner rather than later” approach as the US economy “has a good trajectory on it right now.”

In turn, NZD/USD may face headwinds ahead of the next FOMC interest rate decision on September 22 as President George emphasizes that the central bank has “met the criteria for our inflation objective,” but a further advance in the exchange rate may fuel the recent flip in retail sentiment like the behavior seen during the first-half of the year. 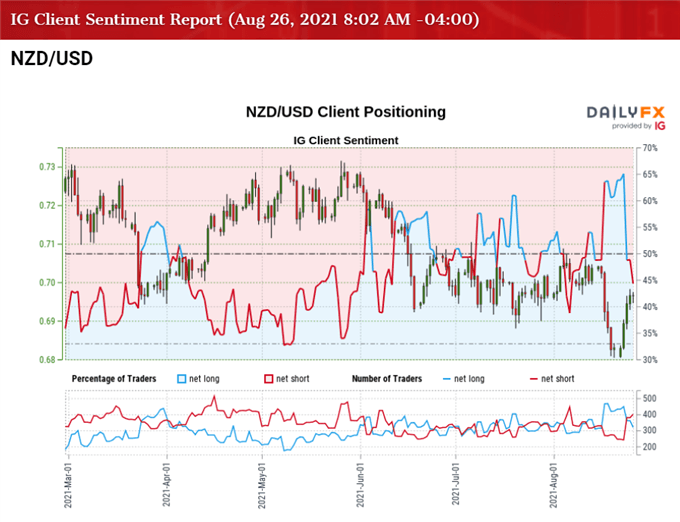 The IG Client Sentiment report shows 42.08% of traders are currently net-long NZD/USD, with the ratio of traders short to long standing at 1.38 to 1.

The number of traders net-long is 9.50% lower than yesterday and 20.20% lower from last week, while the number of traders net-short is 9.58% higher than yesterday and 57.04% higher from last week. The decline in net-long interest comes as NZD/USD struggles to climb back above the 50-Day SMA (0.6982), while the sharp rise in net-short position has fueled the flip in retail sentiment as 60.80% of traders were net-long the pair last week.

With that said, the rebound from the monthly low (0.6805) may turn out to be a correction in the broader trend as NZD/USD continues to trades to fresh yearly lows in the second-half of 2021, and the recent series of higher highs and lows in the exchange rate may unravel amid the lack of momentum to us back above the 50-Day SMA (0.6982).