EUR/USD Susceptible to Dovish ECB Guidance Ahead of Fed Symposium

EUR/USD attempts to stage a three-day rally after taking out the March low (1.1704), but the account of the European Central Bank (ECB) meeting may undermine the recent rebound in the exchange rate as the Governing Council appears to be on track to retain the current policy throughout the remainder of the year.

EUR/USD Susceptible to Dovish ECB Guidance Ahead of Fed Symposium

EUR/USD tags a fresh weekly high (1.1765) ahead of the Kansas City Fed Economic Symposium as the district bank announced that event will be held ‘virtually on Friday, August 27,’ and the adjustment appears to be taming speculation for a material announcement as “health conditions will prevent us from being able to gather in person at the Jackson Lake Lodge this year.”

It remains to be seen if the resurgence of COVID-19 cases will encourage the Federal Reserve to retain the current course for monetary policy as the central bank scraps its original plan to convene in Jackson Hole Wyoming, and more of the same from Chairman Jerome Powell and Co. may produce a bearish reaction in the US Dollar as the Federal Open Market Committee (FOMC) remains reluctant to draw up an exit strategy.

However, indications of a looming shift in monetary policy may undermine the recent recovery in EUR/USD as a growing number of Fed officials show a greater willingness to switch gears, and the diverging paths for monetary policy produce headwinds for Euro Dollar as the European Central Bank (ECB) expects “purchases under the pandemic emergency purchase programme (PEPP) over the current quarter to be conducted at a significantly higher pace than during the first months of the year.”

The account of the ECB’s July meeting is likely to reflect a dovish forward guidance as the Governing Council braces for “a transitory period in which inflation is moderately above target,” and President Christine Lagarde and Co. may look to support the monetary union throughout the remainder of the year as “the outlook for inflation over the medium term remains subdued.”

In turn, failure to defendMarch low (1.1704) casts a bearish outlook for EUR/USD as it snaps the broad range from earlier this year, but a further decline in the exchange rate may fuel the tilt in retail sentiment like the behavior seen earlier this year. 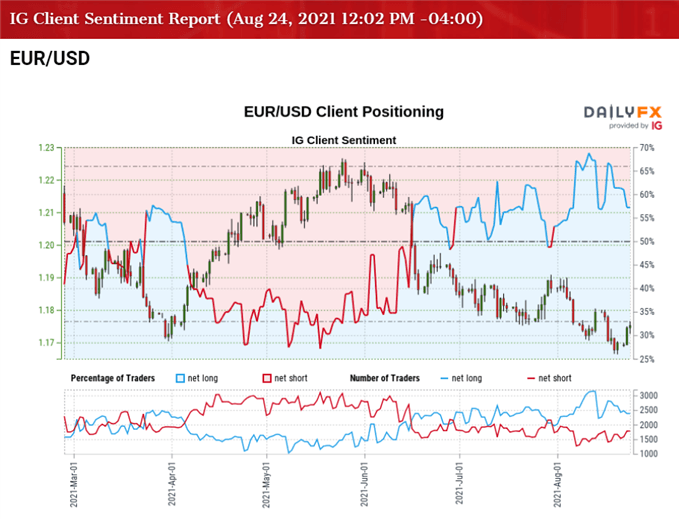 The IG Client Sentiment report shows 56.70% of traders are currently net-long EUR/USD, with the ratio of traders long to short standing at 1.31 to 1.

The number of traders net-long is 2.55% lower than yesterday and 4.20% lower from last week, while the number of traders net-short is 14.86% higher than yesterday and 15.28% higher from last week. The decline in net-long position could be a function of profit-taking behavior as EUR/USD tags a fresh weekly high (1.1765), while the rise in net-short interest has helped to alleviate the crowding behavior as 62.33% of traders were net-long the pair last week.

With that said, EUR/USD may face headwinds ahead of the Fed symposium as the ECB appears to be on a preset course, and the break of the March low (1.1704) casts a bearish outlook for EUR/USD as it snaps the broad range from earlier this year.