USD/CAD extends the pullback from the fresh yearly high (1.2949) as the Relative Strength Index (RSI) falls back from overbought territory to indicate a textbook sell signal, but the Kansas City Fed Economic Symposium scheduled for August 26 – 28 may keep the exchange rate afloat if Federal Reserve officials show a greater willingness to switch gears.

USD/CAD appears to have reversed course following the failed attempt to test the December 2020 high (1.3009), and the exchange rate may face a larger correction if Chairman Jerome Powell and Co. endorse a wait-and-see approach ahead of the next quarterly meeting in September.

However, the break above the 2021 opening range indicates a potential change in the broader trend as an inverse head-and-shoulders formation takes shape, and speculation for a looming shift in Fed policy may keep USD/CAD afloat as a growing number of central bank officials show a greater willingness to scale back monetary support.

As a result, the Fed symposium may produce a bullish reaction in the US Dollar if Federal Reserve officials lay out a potential exit strategy, and the Greenback may continue to outperform its Canadian counterpart as the Bank of Canada (BoC) “now expects GDP growth of around 6 percent in 2021 – a little slower than was expected in April.”

In turn, USD/CAD may continue to appreciate ahead of the next BoC interest rate decision on September 8 as Governor Tiff Macklem and Co. insist that “the recovery continues to require extraordinary monetary policy support, but a further advance in the exchange rate may fuel the recent flip in retail sentiment as traders turn net-short for the second time this year. 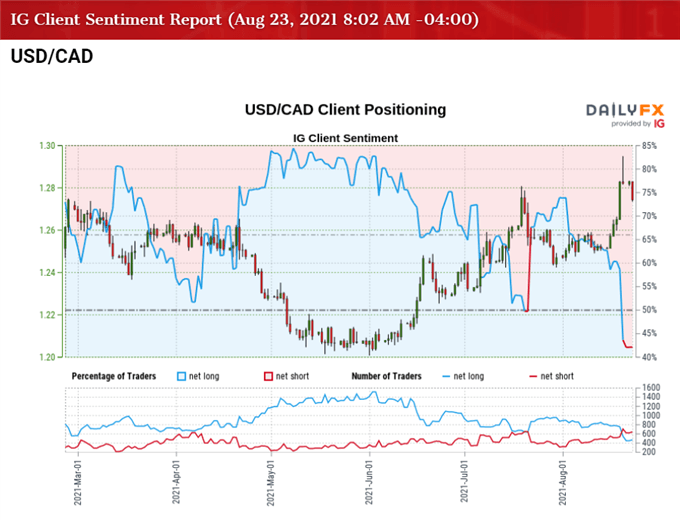 The IG Client Sentiment report shows 42.07% of traders are currently net-long USD/CAD with the ratio of traders short to long standing at 1.38 to 1.

The number of traders net-long is 9.94% higher than yesterday and 41.83% lower from last week, while the number of traders net-short is 8.51% higher than yesterday and 49.47% higher from last week. The decline in net-long position comes as USD/CAD extends the decline from the fresh yearly high (1.2949), while the jump in net-short interest has fueled the shift in retail sentiment as 65.48% of traders were net-long the pair on August 10.

With that said, the break above the January high (1.2881) may continue to indicate a change in the broader trend as an inverse head-and-shoulders formation takes shape, but the failed attempt to test the December 2020 high (1.3009) may generate a larger pullback in USD/CAD as the Relative Strength Index (RSI) falls back from overbought territory.