AUD/USD slips to a fresh yearly low (0.7238) as it extends the decline following the Reserve Bank of Australia (RBA) Minutes, and the exchange rate may continue to give back the advance from the November 2020 low (0.6991) as it trades within a downward trending channel.

AUD/USD remains under pressure as the RBA Minutes warns that “the current virus outbreaks and lockdowns had interrupted the recovery,” and the exchange rate may face a further decline ahead of the Kansas City Fed Economic Symposium scheduled for August 26 – 28 amid the diverging paths for monetary policy.

It seems as though the RBA is on a preset course as the central bank plans to “continue with the bond purchase program at a reduced rate of $4 billon a week, once the second $100 billion of purchases is complete in September 2021,” and Governor Philip Lowe and Co. appear to be in no rush to switch gears as the “Board would be prepared to act in response to further bad news on the health front should that lead to a more significant setback for the economic recovery.”

As a result, the update to Australia’s Employment report may keep the RBA on the sidelines at its next interest rate decision on September 7 as the economy is expected to shed 46.2K jobs in July, and the renewed lockdowns across Asia/Pacific may continue to drag on AUD/USD as a growing number of Federal Reserve officials show a greater willingness to taper the quantitative easing (QE) program.

In turn, the decline from the February high (0.8007) indicates a change in the broader trend as AUD/USD sits below the 200-Day SMA (0.7605) for the first time in over a year, but a further depreciation in the exchange rate may fuel the tilt in retail sentiment like the behavior seen earlier this year. 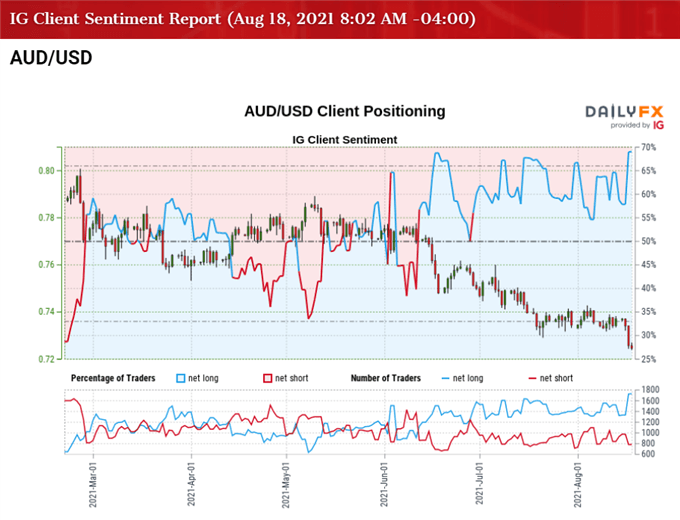 The IG Client Sentiment report shows 66.96% of traders are currently net-long AUD/USD, with the ratio of traders long to short standing at 2.03 to 1.

The number of traders net-long is 6.10% higher than yesterday and 12.85% higher from last week, while the number of traders net-short is 2.58% lower than yesterday and 17.27% lower from last week. The rise in net-long interest has fueled the crowding behavior as 64.08% of traders were net-long AUD/USD last week, while the decline in net-short position could be a function of profit-taking behavior as the exchange rate slips to a fresh yearly low (0.7238).

With that said, AUD/USD may continue to give back the advance from the November 2020 low (0.6991) as it trades within a downward trending channel, and the update to Australia’s Employment report may keep the exchange rate under pressure as job growth is expected to contract for the second time this year.