USD/JPY fails to extend the series of lower highs and lows from the previous week despite the weaker-than-expected US Retail Sales report, and the exchange rate may continue to retrace the decline from the monthly high (110.80) as a growing number of Federal Reserve officials show a greater willingness to switch gears.

USD/JPY appears to have reversed course ahead of the August low (108.72) even as longer-dated US Treasury yields come under pressure, and the exchange rate may track the monthly range ahead of the Kansas City Fed Economic Symposium scheduled for August 26 – 28 as the Federal Open Market Committee (FOMC) appears to be on track to taper its asset-purchase program.

Recent remarks from Boston Fed President Eric Rosengren suggest the central bank will adjust the forward guidance over the coming months as the 2022-voting member on the FOMC favors tapering the quantitative easing (QE) program “sooner rather than later,” and speculation for a looming shift in monetary policy may keep USD/JPY afloat as the Fed officials see two rate-hikes in 2023.

However, more of the same from Chairman Jerome Powell and Co. at the Fed symposium may drag on the US Dollar as Governor Lael Brainard expects to “be more confident in assessing the rate of progress once we have data in hand for September,” and a further decline in USD/JPY may fuel the recent flip in retail sentiment like the behavior seen earlier this year. 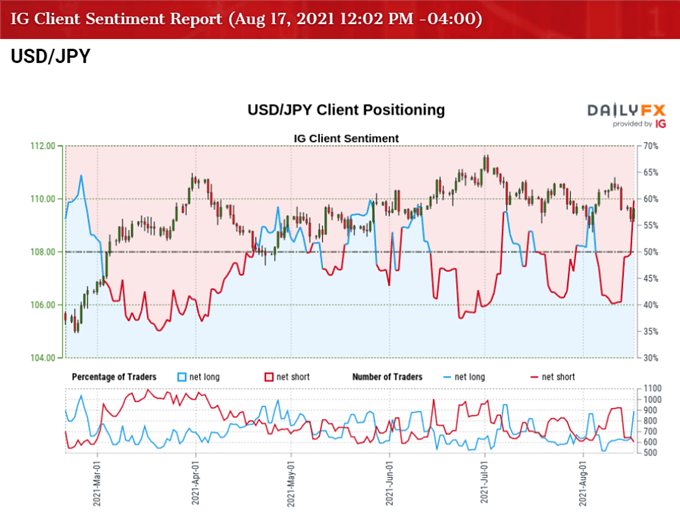 The IG Client Sentiment report shows 63.74% of traders are currently net-long USD/JPY, with the ratio of traders long to short standing at 1.76 to 1.

The number of traders net-long is 21.86% higher than yesterday and 50.46% higher from last week, while the number of traders net-short is 13.49% lower than yesterday and 35.19% lower from last week. The surge in net-long interest has fueled the shift in retail sentiment as 43.09% of traders were net-long USD/JPY last week, while the decline in net-short position could be a function of profit-taking behavior as the exchange rate appears to have reversed course ahead of the August low (108.72).

With that said, swings in retail sentiment may persist as USD/JPY appears to be stuck in a defined range, and the exchange rate may work its way towards the top of the August range as it fails to extend the series of lower highs and lows carried over from the previous week.