NZD/USD appears to be stuck in a defined range as a growing number of Federal Reserve officials show a greater willingness to switch gears, but the Reserve Bank of New Zealand (RBNZ) interest rate decision may influence the near-term outlook for the exchange rate as the central bank is expected to lift the official cash rate (OCR) off of the record low.

NZD/USD attempts to push back above the 50-Day SMA (0.7017) as it tracks the monthly opening range for August, and the RBNZ rate decision may trigger a bullish reaction in the New Zealand Dollar as the central bank is expected to deliver a 25bp rate hike.

The RBNZ appears to be on track to normalize monetary policy as “the Committee agreed that the level of monetary stimulus could now be reduced” at its last meeting in July, and a material shift in theforward guidance may generate a near-term breakout in NZD/USD as the better-than-expected New Zealand Employment report points to a robust recovery.

However, it remains to be seen if the RBNZ will shift gears ahead of its major counterparts as the Monetary Policy Report (MPR) from May shows the OCR averaging 0.3% in 2022, and the New Zealand Dollar is likely to face headwinds if Governor Adrian Orr and Co. continue to endorse a wait-and-see approach for monetary policy.

As a result, NZD/USD may threaten the opening range for August if the RBNZ fails to deliver a 25bp rate hike, but a near-term recovery in the exchange rate may fuel the recent flip in retail sentiment as traders turn net-short the pair for the second time this month. 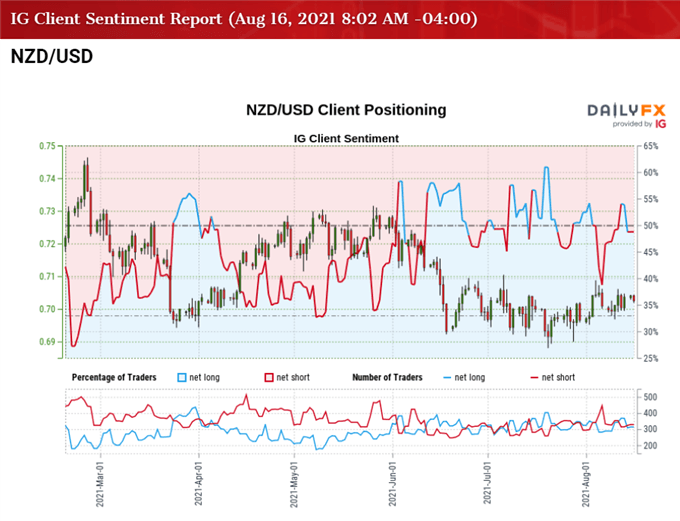 The IG Client Sentiment report shows 45.78% of traders are currently net-long NZD/USD, with the ratio of traders short to long standing at 1.18 to 1.

The number of traders net-long is 3.80% lower than yesterday and 6.46% lower from last week, while the number of traders net-short is 7.46% higher than yesterday and 9.09% higher from last week. The decline in net-long position could be a function of profit-taking behavior has NZD/USD attempts to push back above the 50-Day SMA (0.7017), while the rise in net-short interest comes as the exchange rate appears to be stuck within the opening range for August.

With that said, a further recovery in NZD/USD may fuel the recent shift in retail sentiment like the behavior seen earlier this year, but the RBNZ rate decision may produce headwinds for the New Zealand Dollar if the central bank keeps the OCR at the record low of 0.25%.