EUR/USD appears to be defending the March low (1.1704) as it halts an eight day losing streak, and the exchange rate may stage a larger recovery over the near-term as it tracks the range from the first half of the year.

EUR/USD rebounds from a fresh monthly low (1.1706) as the update to the US Consumer Price Index (CPI) drags on the Greenback, with the exchange rate carving a bullish outside day candle even as a growing number of Federal Reserve officials adopt a hawkish tone.

In an interview with the Financial Times, San Francisco Fed President Mary Daly, who votes on the Federal Open Market Committee (FOMC) this year, emphasized that “it’s appropriate to start discussing dialing back the level of accommodation,” and insists that the central bank could start “dialing back” its asset-purchases by the end of the year amid the ongoing improvement in the economy.

The comments largely echo the recent remarks from Boston Fed President Eric Rosengren as the 2022 FOMC voting-member sees scope to winddown the emergency measures “this fall,” and EUR/USD may face headwinds ahead of the Kansas City Fed Economic Symposium scheduled for August 26 – 28 as the FOMC seems to be on track to switch gears later this year.

Nevertheless, EUR/USD may continue to track the range from the first half of the year as it appears to be defending the March low (1.1704), and a larger recovery in the exchange rate may tame the tilt in retail sentiment like the behavior seen earlier this year. 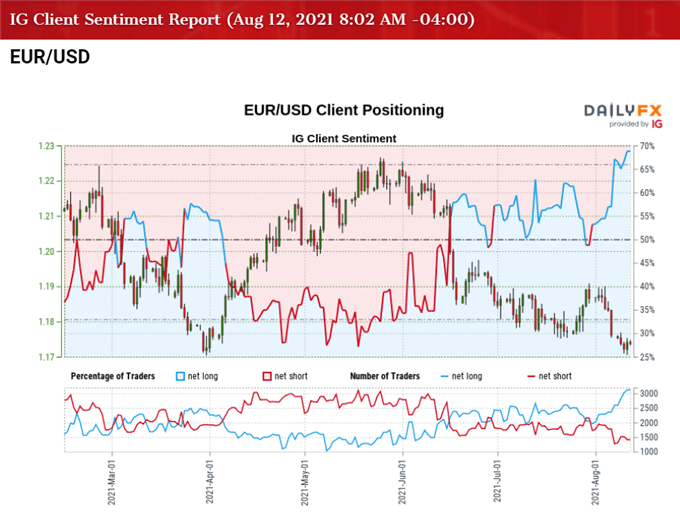 The IG Client Sentiment report shows 67.80% of traders are currently net-long EUR/USD, with the ratio of traders long to short standing at 2.11 to 1.

The number of traders net-long is 3.23% higher than yesterday and 35.24% higher from last week, while the number of traders net-short is 2.09% lower than yesterday and 16.69% lower from last week. The rise in net-long interest has fueled the crowding behavior has 51.18% of traders were net-long EUR/USD at the end of last month, while the decline in net-short position could be a function of profit-taking behavior as the exchange rate halts an eight day losing streak.

With that said, EUR/USD may continue to defend the March low (1.1704) even as a growing number of Fed officials show a greater willingness to scale back its emergency measures, and the exchange rate may track the range from the first half of the year until the FOMC lays out a detailed exit strategy.