NZD/USD Rate Defends August Rally Ahead of US NFP Report

NZD/USD defends the rally following the better-than-expected New Zealand Employment report even as Federal Reserve officials show a greater willingness to switch gears, and recent developments in the Relative Strength Index (RSI) indicate a larger recovery in the exchange rate as the oscillator breaks out of the downward trend from earlier this year.

NZD/USD Rate Defends August Rally Ahead of US NFP Report

NZD/USD trades above the 50-Day SMA (0.7047) for the first time since June after slipping to a fresh yearly low (0.6881) in July, and the update to the US Non-Farm Payrolls (NFP) report is likely to influence the exchange rate as Fed Vice-Chair Richard Clarida fuels speculation for a looming exit strategy.

The NFP report is now expected to show the US adding 870K jobs in July following the 850K expansion the month prior, and signs of stronger labor market may undermine the recent rebound in NZD/USD as it puts pressure on the Federal Open Market Committee (FOMC) to scale back its quantitative easing (QE) program.

At the same time, a dismal development may spark a bearish reaction in the US Dollar as it provides the Fed with scope to retain the current course for monetary policy, but a further recovery in NZD/USD may fuel the recent shift in retail sentiment like the behavior seen earlier this year. 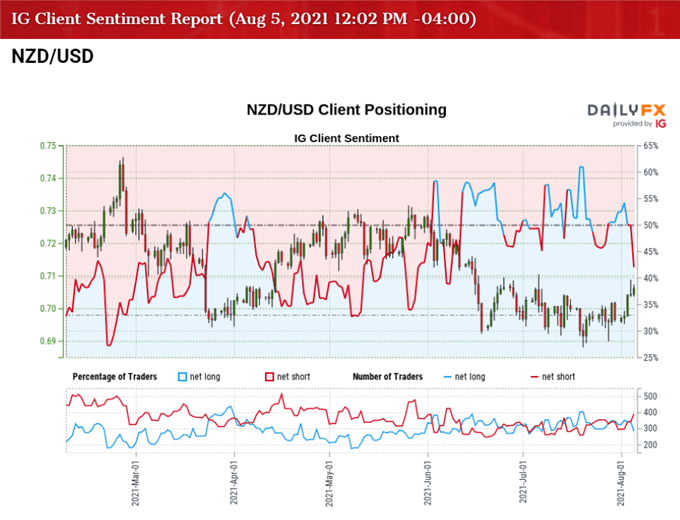 The number of traders net-long is 0.69% lower than yesterday and 19.27% lower from last week, while the number of traders net-short is 3.22% higher than yesterday and 24.03% higher from last week. The decline in net-long position could be a function of profit-taking behavior as NZD/USD defends the advance from earlier this week, while the rise in net-short position has fueled the shift in retail sentiment as 51.48% of traders were net-long the pair last week.

With that said, it remains to be seen if the NFP report will undermine the recent rebound in NZD/USD as the update is anticipated to show a further improvement in employment, but a further recovery in the exchange rate may fuel the recent shift in retail sentiment like the behavior seen earlier this year.