EUR/USD struggles to retain the rebound from the monthly low (1.1772) as Federal Reserve officials indicate a looming shift in monetary policy, but fresh data prints coming out of the US may keep the exchange rate afloat as Retail Sales is expected to contact for second straight month.

EUR/USD appears to be on track to test the March low (1.1704) as St. Louis Fed President James Bullard hints at the growing discussion to scale back monetary support, with the 2022 voting-member on the Federal Open Market Committee (FOMC) insisting that the US is in a “situation where we can taper.”

In a recent interview with Bloomberg News, Bullard argues that “it’s time to end these emergency measures” as the central bank forecasts the economy to expand 7.0% in 2021, and a growing number of Fed officials may strike a similar tone as the US Consumer Price Index (CPI) unexpectedly widens to 5.4% in June from 5.0% per annum the month prior.

As a result, the FOMC may start to draw up a tentative exit strategy as Fed officials forecast two rate hikes for 2023, but the testimony from Chairman Jerome Powell suggests the committee is in no rush to switch gears as the central bank head tells US lawmakers that “reaching the standard of ‘substantial further progress’ is still a ways off.”

In turn, the update to the US Retail Sales report may sway EUR/USD as household spending is expected to contract 0.4% in June after contracting 1.3% the month prior, and signs of a less robust recovery may keep the FOMC on the sidelines at its next interest rate decision on July 28 as the central bank braces for a transitory rise in inflation.

Until then, EUR/USD may approach the March low (1.1704) as it fails to retain the advance following the European Central Bank (ECB) Strategy Review, but a further decline in the exchange rate may fuel the shift in retail sentiment to largely mimic the behavior from earlier this year. 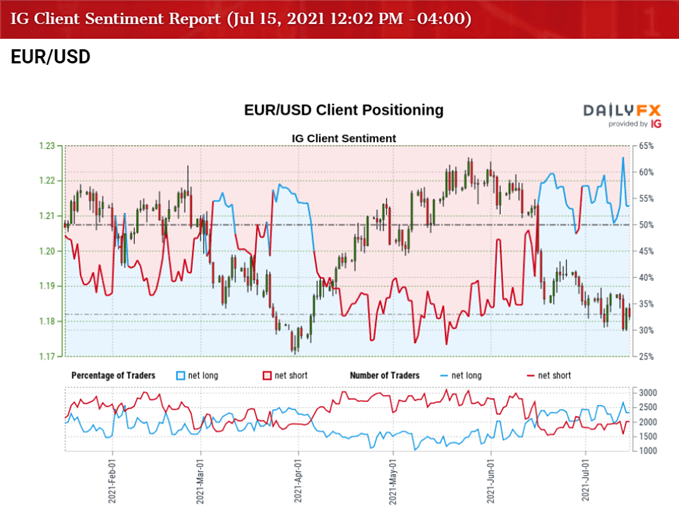 The IG Client Sentiment report shows 53.80% of traders are currently net-long EUR/USD, with the ratio of traders long to short standing at 1.16 to 1.

The number of traders net-long is 3.91% lower than yesterday and 3.38% higher from last week, while the number of traders net-short is 9.00% higher than yesterday and 7.00% higher from last week. The rise in net-long position comes even as EUR/USD struggles to retain the rebound from the monthly low (1.1772), while the increase in net-short interest has done little to alleviate the crowding behavior as 54.33% of traders were net-long the pair last week.

With that said, the advance from the yearly low (1.1704) may continue to unravel as EUR/USD trades below the 200-Day SMA (1.2002) for the first time since April, but fresh data prints coming out of the US may keep the exchange rate afloat if the US Retail Sales report dampens the outlook for growth.