USD/JPY consolidates after trading to a fresh yearly high (111.12) during the previous week, but developments coming out of the US may keep the exchange rate afloat ahead of the Non-Farm Payrolls (NFP) report as a growing number of Federal Reserve officials show a greater willingness to switch gears.

USD/JPY attempts to halt a three day losing streak as it bounces back from a fresh weekly low (110.45), and the exchange rate may retrace the decline from the previous week as the NFP report is anticipated to show the US economy adding 690K jobs in June.

A further improvement in the labor market may put pressure on the Federal Open Market Committee (FOMC) to discuss an exit strategy over the coming months as Richmond Fed President Thomas Barkin, who votes on the FOMC this year, emphasizes “that we have had substantial further progress on the Fed’s inflation goal” while speaking at the Rotary Club of Atlanta.

In turn, Barkin acknowledged that the FOMC may achieve its policy targets “in short order” amid the ongoing improvement in the labor market, with the official going onto say that “I think you will see the workforce expand again in September with kids back in school.”

The comments largely align with the recent speech by Boston Fed President Eric Rosengren as the 2022 voting member on the FOMC insists that “it’s certainly time to start thinking about how quickly is it appropriate to remove accommodation,” and it remains to be seen if Chairman Jerome Powell and Co. will adjust the forward guidance at the next interest rate decision on July 28 as the central bank forecasts two rate hikes for 2023.

Until then, developments coming out of the US may keep USD/JPY afloat as Fed officials adopt a hawkish tone, but a further appreciation in the exchange rate may fuel the recent flip in retail sentiment like the behavior seen earlier this year. 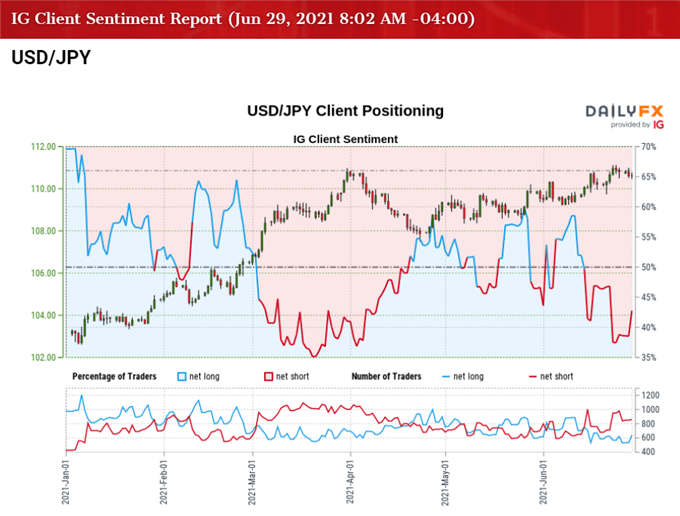 The IG Client Sentiment report shows 41.43% of traders are currently net-long USD/JPY, with the ratio of traders short to long standing at 1.41 to 1.

The number of traders net-long is 4.90% higher than yesterday and 7.45% lower from last week, while the number of traders net-short is 2.12% lower than yesterday and 16.76% higher from last week. The decline in net-long position comes as USD/JPY consolidates after trading to a fresh yearly high (111.12) during the previous week, while the rise in net-short interest has fueled the tilt in retail sentiment as 47.04% of traders were net-long the pair last week.

With that said, a further appreciation in USD/JPY may fuel the recent flip in retail sentiment to largely mimic the behavior from earlier this year, and the pullback from the yearly high (111.12) may turn out to be a mere correction in the broader trend as the Relative Strength Index (RSI) continues to track the bullish formation established in April.