NZD/USD trades back below the 200-Day SMA (0.7045) as it snaps a five day rally, and the exchange rate may face a further decline over the coming days as it carves a fresh series of lower highs and lows.

NZD/USD has been unfazed by the Reserve Bank of New Zealand’s Statement of Intent for 2021-2024 even as the central bank acknowledges that “economic activity in New Zealand is returning to its pre-COVID-19 levels” as a growing number of Federal Reserve officials show a greater willingness to discuss an exit strategy.

The Fed and RBNZ appear to be plotting different paths as Governor Adrian Orr warns of the “divergences in economic activity, both within and between countries,” and it seems as though the RBNZ will support the New Zealand economy throughout the rest of the year as the central bank plans to achieve its policy targets “in a holistic manner.”

The comments suggest the RBNZ will retain the current policy at its next interest rate decision on July 14 as the Governor Orr pledges to “look at the full range of challenges and opportunities available to us,” but the recent shift in retail sentiment has gathered pace even as NZD/USD trades back below the 200-Day SMA (0.7045). 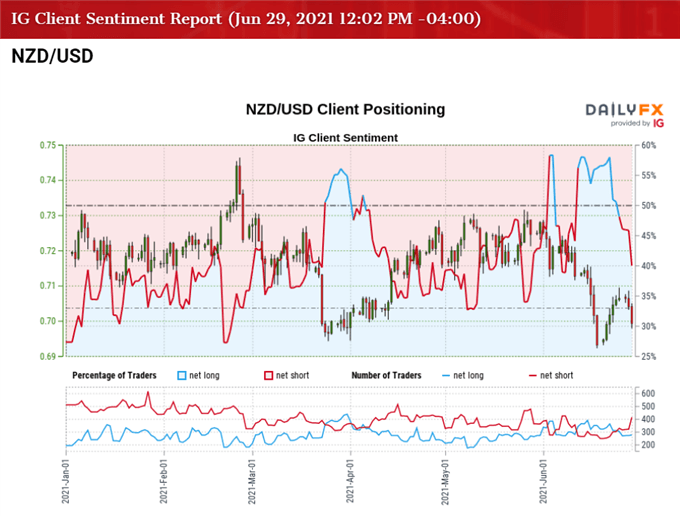 The IG Client Sentiment report shows 43.88% of traders are currently net-long NZD/USD, with the ratio of traders short to long standing at 1.28 to 1.

The number of traders net-long is 3.44% higher than yesterday and 20.37% lower from last week, while the number of traders net-short is 1.05% higher than yesterday and 23.00% higher from last week. The decline in net-long interest could be a function of profit taking behavior as NZD/USD snaps a five day rally, while the rise in net-short position has fueled the flip in retail sentiment as 49.12% of traders were net-long the pair at the end of last week.

With that said, it remains to be seen if the shift in retail sentiment will reflect the dynamic seen earlier this year as the break of the 200-Day SMA (0.7045) materialized for the first time since June 2020, and the rebound from the fresh yearly low (0.6923) may continue to unravel as NZD/USD carves a fresh series of lower highs and lows.