EUR/USD trades to a fresh weekly high (1.1955) as Fed Chairman Jerome Powell strikes a dovish forward guidance in front of US lawmakers, and the exchange rate may stage a larger rebound over the remainder of the week as the Relative Strength Index (RSI) bounces back from oversold territory to indicate a textbook buy signal.

EUR/USD may continue to retrace the decline following the Federal Reserve interest rate decision as it extends the series of higher highs and lows from the start of the week, but fresh data prints coming out of the US economy may rattle the recent rebound in the exchange rate as the Core Personal Consumption Expenditure (PCE) Price Index is expected to widen for the third consecutive month.

The Fed’s preferred gauge for inflation is projected to increase to 3.4% from 3.1% per annum in April, which would mark the highest reading since 1992, and persistent signs of stronger price growth may put pressure on the Federal Open Market Committee (FOMC) to adjust the forward guidance as the central bank now forecasts the economy to grow 7.0% in 2021.

In turn, the FOMC may start to discuss an exit strategy as officials continue to upgrade their economic outlook, but the recent testimony from Chairman Powell suggests the Fed is in no rush to switch gears as the central bank head tells US lawmakers that “inflation is expected to drop back toward our longer-run goal.”

In turn, Chairman Powell insists that “the Fed will do everything we can to support the economy for as long as it takes to complete the recovery,” and it seems as though the FOMC will stick to the same script at the next interest rate decision on July 28 as the central bank braces for a transitory rise in inflation.

Until then, EUR/USD may stage a larger rebound from the monthly low (1.1847) as it extends the bullish price series from the start of the week, but the recent shift in retail sentiment looks poised to persist as the exchange rate trades below the 200-Day SMA (1.1993) for the first time since April. 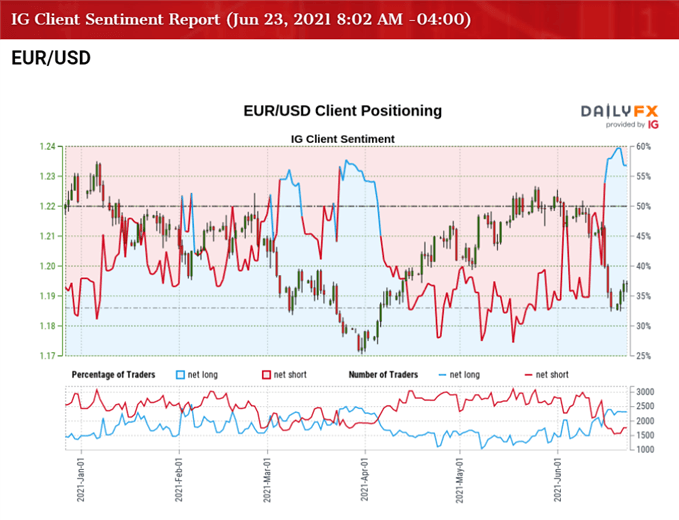 The IG Client Sentiment report shows 59.03% of traders are currently net-long EUR/USD, with the ratio of traders long to short standing at 1.44 to 1.

The number of traders net-long is 9.31% higher than yesterday and 40.50% higher from last week, while the number of traders net-short is 8.86% lower than yesterday and 35.05% lower from last week. The jump in net-long position comes as EUR/USD extends the rebound from the monthly low (1.1847), while the sharp decline in net-short position has fueled the tilt in retail sentiment as 57.24% of traders were net-long the pair at the end of last week.

With that said, it remains to be seen if the decline from the January high (1.2350) will turn out to be a correction in the broader trend rather than a change in market behavior as EUR/USD attempts to retrace the decline following the Fed rate decision, and the exchange rate may stage a larger rebound over the remainder of the week as the Relative Strength Index (RSI) bounces back from oversold territory to indicate a textbook buy signal.