AUD/USD attempts to retrace the decline following the Federal Open Market Committee (FOMC) interest rate decision as it bounces back from a fresh 2021 low (0.7477), with the Relative Strength Index (RSI) indicating a textbook buy signal as it rebounds from oversold territory and climbs back above 30.

AUD/USD trades below the 200-Day SMA (0.7550) for the first time since June 2020 as Federal Reserve officials forecast two rate hikes for 2023, while the Reserve Bank of Australia (RBA) appears to be a on a preset course as the central bank is unlikely to achieve its policy targets “until 2024 at the earliest.”

It seems as though the RBA is in no rush to switch gears as the central bank pledges to “not increase the cash rate until actual inflation is sustainably within the 2 to 3 per cent target range,” and Governor Philip Lowe and Co. may continue to strike a dovish forward guidance in the second half of the year as “inflation and wage pressures are subdued.”

However, the RBA may lay out an exit strategy at its next interest rate decision on July 6 as officials “consider future bond purchases following the completion of the second $100 billion of purchases under the government bond purchase program in September,” and indications of a looming shift in monetary policy may prop up AUD/USD if the central bank shows a greater willingness to wind down its emergency tools.

Until then, AUD/USD continue to retrace the decline following the Fed rate decision as the RSI bounces back from oversold territory, but the recent shift in retail sentiment looks poised to persist as the exchange rate trades below the 200-Day SMA (0.7550) for the first time since June 2020. 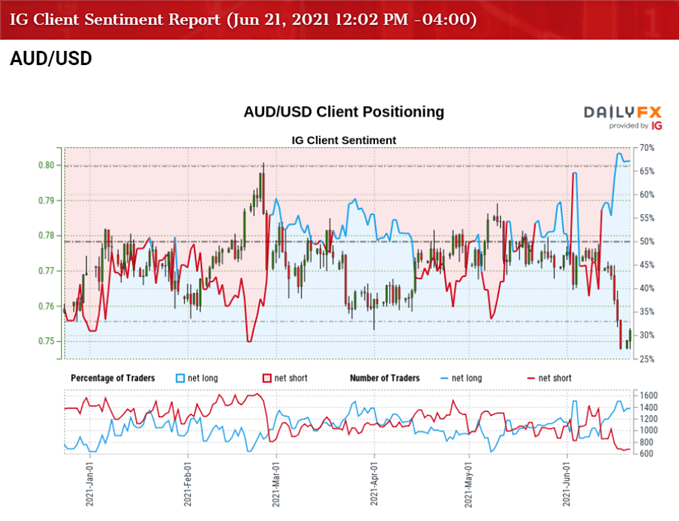 The IG Client Sentiment report shows 66.01% of traders are currently net-long AUD/USD, with the ratio of traders long to short standing at 1.94 to 1.

The number of traders net-long is 16.14% higher than yesterday and 15.44% higher from last week, while the number of traders net-short is 20.70% higher than yesterday and 19.25% lower from last week. The rise in net-long position has fueled the recent shift in retail sentiment as 57.60% of traders were net-long AUD/USD last week, while the decline in net-short position could be a function of profit-taking behavior as the exchange rate bounces back from a fresh yearly low (0.7477).

With that said, it remains to be seen if the decline from the February high (0.8007) will turn out to be a correction in the broader trend or a change in market behavior amid the flip in retail sentiment, but AUD/USD may stage a larger rebound over the coming days as the RSI climbs back above 30 to indicate a textbook buy signal.