AUD/USD slips below the 200-Day SMA (0.7548) for the first time since June 2020 as fresh forecasts coming out of the Federal Reserve indicate two rate hikes for 2023, and the exchange rate appears to be on track to test the yearly low (0.7532) as it fails to retain the opening range for June.

AUD/USD trades to a fresh monthly low (0.7540) as the Federal Open Market Committee (FOMC) now forecasts the US economy to grow 7.0% in 2021, with the exchange rate largely unfazed by the sharp rise in Australia Employment as Fed officials show a greater willingness to switch gears sooner than previously projected.

It remains to be seen if the Reserve Bank of Australia (RBA) will respond to the 115.2K rise in job growth as the Unemployment Rate slips to 5.1% to mark its lowest reading since February 2020, and the ongoing improvement may encourage the central bank to gradually change its tone in the second half of the year as Governor Philip Lowe acknowledges that the “level of employment in Australia is above its pre-pandemic level.”

In a recent speech at the Australian Farm Institute Conference, Governor Lowe insists that “the economy is now transitioning from recovery mode to expansion mode,” with the central bank going onto say that “the GDP data also paint a positive picture of the recovery, which has been V-shaped.”

However, Governor Lowe warns that “it is premature to be considering ceasing bond purchases” as officials sees little probability of achieving the dual mandate until 2024, and it seems as though the RBA will continue to layout a dovish forward guidance at its next interest rate decision on July 6 as the central bank head reiterates that the Board “will not increase the cash rate until inflation is sustainably within the 2–3 per cent target range.”

Until then, AUD/USD may face headwinds as the RBA appears to be on a preset course, and a further decline in the exchange rate may fuel the recent flip in retail sentiment like the behavior seen earlier this year. 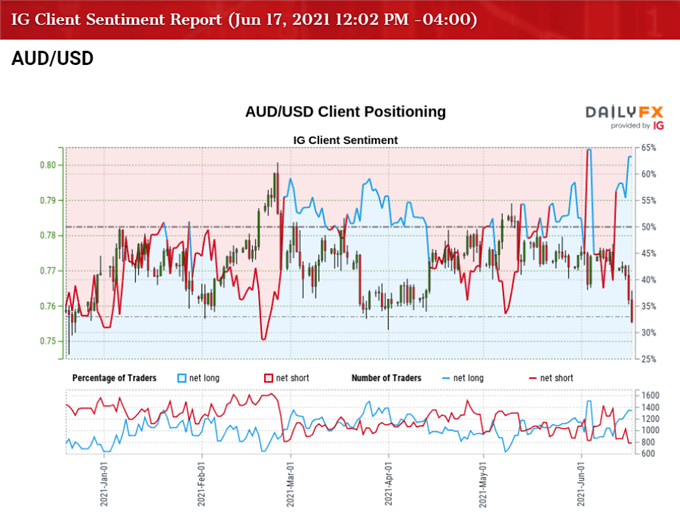 The IG Client Sentiment report shows 65.93% of traders are currently net-long AUD/USD, with the ratio of traders long to short standing at 1.94 to 1.

The number of traders net-long is 14.67% higher than yesterday and 52.49% higher from last week, while the number of traders net-short is 33.96% lower than yesterday and 42.85% lower from last week. The jump in net-long interest has fueled the recent shift in retail sentiment as 57.60% of traders were net-long AUD/USD at the start of the week, while the sharp drop in net-short position could be a function of profit-taking behavior as the exchange rate slips below the 200-Day SMA (0.7548) for the first time since June 2020.

With that said, the decline from the February high (0.8007) may turn out to be protentional change in the broader trend amid ongoing shift in retail sentiment, and AUD/USD appears to be on track to test the yearly low (0.7532) as it fails to retain the opening range for June.