NZD/USD trades to a fresh monthly low (0.7112) as the Global Dairy Trade’s bi-weekly auction shows another decline in the GDT Price Index, and the exchange rate is likely to face increased volatility over the next 24-hours with both the Federal Reserve interest rate decision and New Zealand’s Gross Domestic Product (GDP) report coming into focus.

NZD/USD has taken out the May range as GDT Price Index falls 1.3% at the June 15 auction after contracting 0.9% at the prior event, with the weakness led by a 1.8% decline in Whole Milk Powder prices.

It remains to be seen if the Federal Open Market Committee (FOMC) rate decision on June 16 will influence NZD/USD as the central bank is expected to retain the current course for monetary policy, but the update to the Summary of Economic Projections (SEP) may spark a bullish reaction in the US Dollar if Fed officials scale back the dovish forward guidance for monetary policy.

At the same time, more of the same from the FOMC may drag on the Greenback as Chairman Jerome Powell and Co. brace for a transitory rise in inflation, and New Zealand’s GDP report may have a greater influence on the NZD/USD outlook as the economy is expected to avoid a technical recession.

The GDP report is anticipated to show the growth rate rebounding 0.9% in the first quarter of this year after contracting 0.9% during the last three months of 2020, and a positive development may put pressure on the Reserve Bank of New Zealand (RBNZ) to switch gears later this year as “the Committee agreed that the OCR (official cash rate) is the preferred tool to respond to future economic developments in either direction.”

It remains to be seen if the RBNZ will provide an exit strategy over the coming months as the central bank forecasts the OCR to “eventually increases over the medium term,” but Governor Adrian Orr and Co. may stick to the same script at its next interest rate decision on July 14 as officials emphasize that the expected rise in the benchmark interest rate “is conditional on the economic outlook evolving broadly as anticipated.”

Until then, NZD/USD may remain under pressure as it takes out the May range, with the recent depreciation in the exchange rate triggering a shift in retail sentiment. 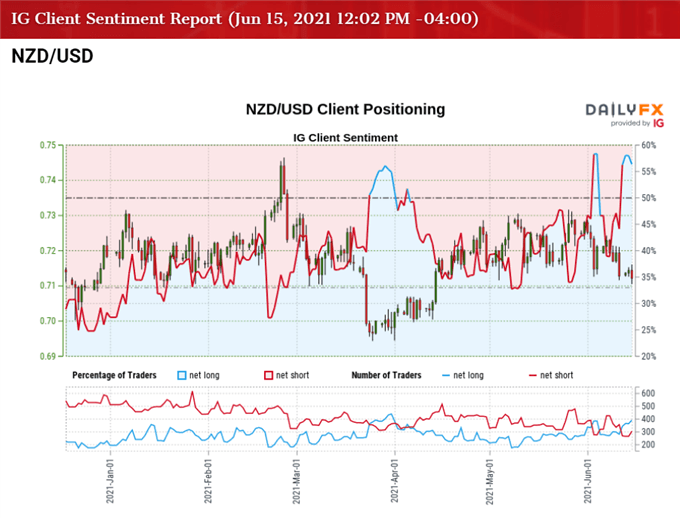 The IG Client Sentiment report shows 56.51% of traders are currently net-long NZD/USD, with the ratio of traders long to short standing at 1.30 to 1.

The number of traders net-long is 6.58% higher than yesterday and 51.44% higher from last week, while the number of traders net-short is 10.58% higher than yesterday and 14.96% lower from last week. The rise in net-long interest has fueled the shift in retail sentiment as 43.05% of traders were net-long NZD/USD last week, while the decline in net-short position could be a function of profit-taking behavior as the exchange rate trades to a fresh monthly low (0.7112).

With that said, the weakness in NZD/USD may continue to coincide with the recent shift in retail sentiment to largely mimic the behavior seen earlier this year, and it remains to be seen if the decline from the yearly high (0.7465) will turn out to be a correction in the broader trend rather than a key reversal as the RBNZ gradually adjusts the forward guidance for monetary policy.