USD/CAD consolidates after breaking out of the opening range for June, but the exchange rate may attempt to test the May high (1.2352) if the Federal Reserve shows a greater willingness to switch gears later this year.

USD/CAD traded to a the monthly high (1.2177) as US Consumer Sentiment bounced back in June, and the Federal Open Market Committee (FOMC) rate decision is likely to sway the near-term outlook for the exchange rate as Fed officials are slated to update the Summary of Economic Projections (SEP).

Fresh forecasts from Chairman Jerome Powell and Co. may spark a bullish reaction in the US Dollar as “the acceleration in economic activity reflected positive developments associated with the rapid pace of vaccinations as well as continued support from fiscal and monetary policies,” and the central bank gradually adjust the forward guidance for monetary policy as “a number of participants suggested that if the economy continued to make rapid progress toward the Committee's goals, it might be appropriate at some point in upcoming meetings to begin discussing a plan for adjusting the pace of asset purchase.”

In turn, another upward revision in the Fed’s interest rate dot plot may keep USD/CAD afloat as it fuels speculation for a looming change in monetary policy, but more of the same from Chairman Powell and Co. may produce headwinds for the Greenback as the central bank relies on its emergency tools to achieve its policy targets.

Until then, USD/CAD may continue to hold around the monthly high (1.2177) as it clears the opening range for June, but the tilt in retail sentiment looks poised to persist as traders have been net-long the pair since May 2020. 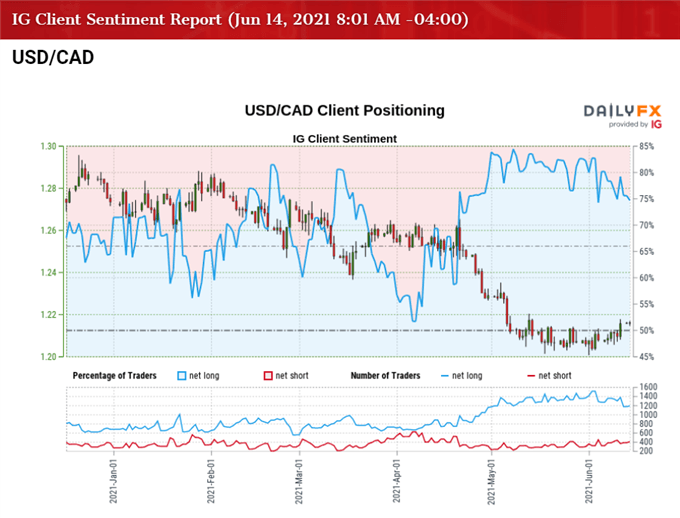 The IG Client Sentiment report shows 73.02% of traders are still net-long USD/CAD, with the ratio of traders long to short standing at 2.71 to 1.

The number of traders net-long is 7.56% higher than yesterday and 4.83% lower from last week, while the number of traders net-short is 14.81% higher than yesterday and 27.84% higher from last week. The drop in net-long interest could be a function of profit-taking behavior as USD/CAD trades near the monthly high (1.2177), while the jump in net-short position has helped to alleviate the crowding behavior as 76.95% of traders were net-long the pair last week.

With that said, it remains to be seen if the rebound from the yearly low (1.2007) will turn out to be a correction in the broader trend or a potential change in USD/CAD behavior as the FOMC warns that “the economy was still far from the Committee's longer-run goals,” but the exchange rate may continue to exhibit a downward trend in 2021 as long as the tilt in retail sentiment persists.