AUD/USD Rate Stuck in Defined Range Ahead of Fed Meeting

AUD/USD is little changed from the start of the year as the Reserve Bank of Australia (RBA) remains reluctant to normalize monetary policy, but the Federal Reserve interest rate decision on June 16 is likely to sway the near-term outlook for the exchange rate as the central bank is slated to update the Summary of Economic Projections (SEP).

AUD/USD Rate Stuck in Defined Range Ahead of Fed Meeting

AUD/USD appears to be reversing ahead of the monthly low (0.7645) as the Federal Open Market Committee (FOMC) is expected to retain the current course for monetary policy, and more of the same from Fed officials may keep the exchange rate afloat as long as the central bank stays on track to “increase its holdings of Treasury securities by at least $80 billion per month and agency mortgage-backed securities by at least $40 billion per month.”

The Fed may continue to emphasize that “it would likely be some time until the economy had made substantial further progress toward the Committee's maximum-employment and price-stability goals” as the central bank braces for a transitory rise in inflation, and Chairman Jerome Powell and Co. may retain a dovish forward guidance as the FOMC remains “committed to using its full range of tools to support the U.S. economy in this challenging time.”

However, fresh forecasts from Fed officials may reflect a looming change in monetary policy as “a number of participants suggested that if the economy continued to make rapid progress toward the Committee's goals, it might be appropriate at some point in upcoming meetings to begin discussing a plan for adjusting the pace of asset purchases,” and a shift in the Fed’s forward guidance may trigger a bearish reaction in AUD/USD as the RBA appears to be on a preset course.

Until then, AUD/USD may continue to consolidate as it struggles to hold above the 50-Day SMA (0.7735) in June, with the range bound price action in the exchange rate spurring a shift in retail sentiment. 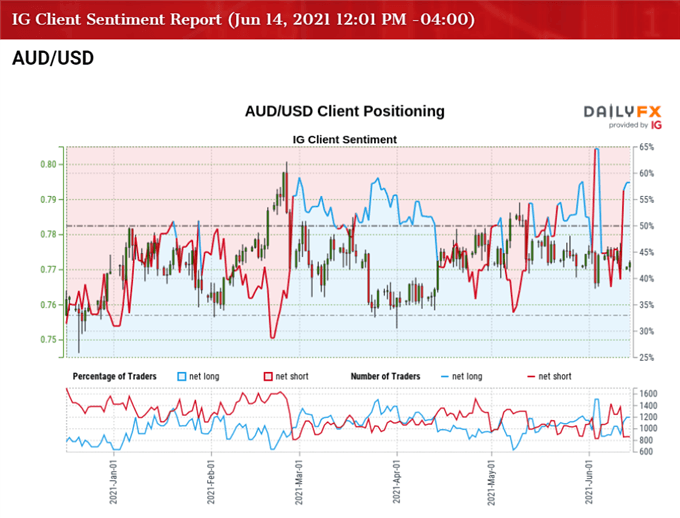 The IG Client Sentiment report shows 57.60% of traders are currently net-long AUD/USD, with the ratio of traders long to short standing at 1.36 to 1.

The number of traders net-long is 7.23% higher than yesterday and 42.52% higher from last week, while the number of traders net-short is 14.19% higher than yesterday and 26.22% lower from last week. The sharp rise in net-long interest comes as AUD/USD appears to have reversed ahead of the monthly low (0.7645), while the decline in net-short interest as helped to fuel the flip in retail sentiment as 46.45% of traders were net-long the pair at the start of the month.

With that said, AUD/USD may face range bound conditions ahead of the FOMC rate decision as the central bank prepares to its fresh forecasts, and it remains to be seen if the decline from the February high (0.8007) will turn out to be a correction in the broader trend or a change in market behavior amid the flip in retail sentiment.