EUR/USD struggles to retain the rebound from the monthly low (1.2104) as the European Central Bank (ECB) retains the current course for monetary policy, and the exchange rate may threaten the opening range for June as it initiates a series of lower highs and lows.

EUR/USD appears to have reversed ahead of the June high (1.2254) even though the ECB upgrades its economic outlook for the Euro Area as the “Governing Council expects net purchases under the PEPP (pandemic emergency purchase programme) over the coming quarter to continue to be conducted at a significantly higher pace than during the first months of the year.”

The ECB appears reluctant to switch gears as European lawmakers have yet to deploy the Next Generation EU Recovery package, and it seems as though President Christine Lagarde and Co. will continue to support the monetary union over the coming months as “an ample degree of monetary accommodation is necessary to support economic activity and the robust convergence of inflation to levels that are below, but close to, 2 per cent over the medium term.”

In turn, the Governing Council may continue to endorse a dovish forward guidance as President Lagarde and Co. “stand ready to adjust all of our instruments, as appropriate, to ensure that inflation moves towards our aim in a sustained manner,” and the Euro may face headwinds ahead of the next ECB interest rate decision on July 22 as the Euro Area recovers from a technical recession.

Nevertheless, the tilt in retail sentiment looks poised to persist as traders have been net-short EUR/USD since April, with the IG Client Sentiment report showing only 35.47% of traders net-long the pair as the ratio of traders short to long stands at 1.82 to 1. 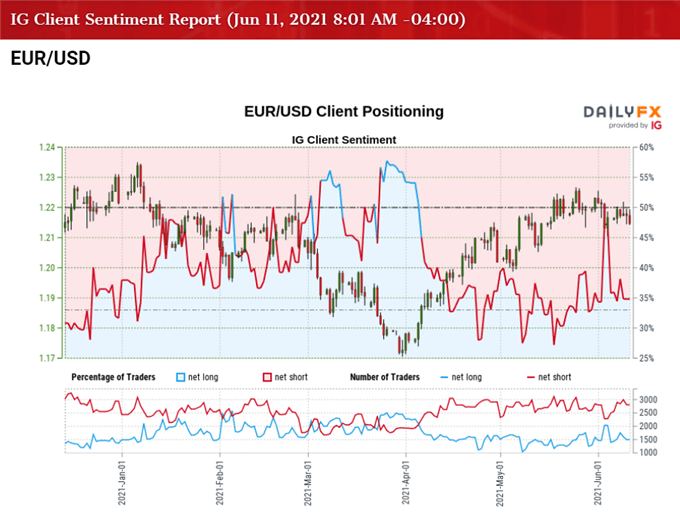 The number of traders net-long is 3.91% lower than yesterday and 23.46% lower from last week, while the number of traders net-short is 8.20% lower than yesterday and 14.91% higher from last week. The sharp decline in net-long position comes as EUR/USD struggles to retain the rebound from the monthly low (1.2104), while the rise in net-short interest has fueled the crowding behavior as 38.50% of traders were net-long ahead of the ECB rate decision.

With that said, it remains to be seen if the decline from the January high (1.2350) will turn out to be a correction in the broader trend rather than a change in EUR/USD behavior as the crowding behavior from 2020 resurfaces, but the exchange rate may threaten the opening range for June as it struggles to retain the rebound from the monthly low (1.2104).