USD/CAD gives back the bounce following the Bank of Canada (BoC) interest rate decision to retain the opening range for June, and the exchange rate may consolidate before resuming the downward trend from earlier this year amid the string of failed attempts to break below the 1.2000 handle.

USD/CAD struggles to retain the rebound from the monthly low (1.2007) even as the BoC keeps its quantitative easing (QE) program “at a target pace of $3 billion per week,” and the exchange rate may continue to exhibit a bearish trend in 2021 as the central bank adopts an improved outlook for the Canadian economy.

It seems as though the BoC will carry out a wait-and-see approach after tapering its asset purchases as “economic developments have been broadly in line with the outlook in the April Monetary Policy Report (MPR),” but the central bank may continue to switch gears over the coming months as “the Canadian economy is expected to rebound strongly.”

In turn, the BoC may reveal a more detailed exit strategy over the coming months as inflation “is expected to ease later in the year, as base-year effects diminish and excess capacity continues to exert downward pressure,” and it remains to be seen if Governor Tiff Macklem and Co. will continue to scale back its emergency measures at its next meeting on July 14 as the central bank is slated to update the MPR.

Until then, USD/CAD may trade within a defined range amid the string of failed attempts to break below the 1.2000 handle, but the tilt in retail sentiment looks poised to persist as traders have been net-long USD/CAD since May 2020. 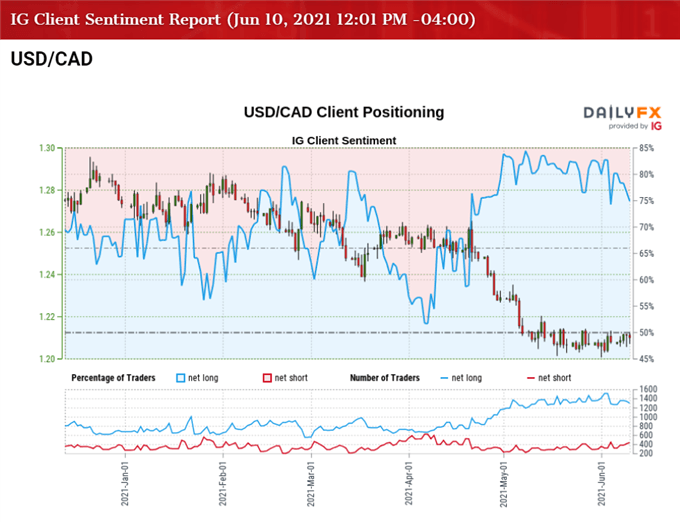 The IG Client Sentiment report shows 76.95% of traders are still net-long USD/CAD, with the ratio of traders long to short standing at 3.34 to 1.

The number of traders net-long is 4.08% lower than yesterday and 1.98% lower from last week, while the number of traders net-short is 0.25% higher than yesterday and 10.47% higher from last week. The decline in net-long position comes as USD/CAD struggles to retain the rebound from the monthly low (1.2007), while the rise in net-short interest has helped to alleviate the crowding behavior as 83.04% of traders were net-long the pair at the start of the month.

With that said, USD/CAD may continue to exhibit a downward trend in 2021 as the tilt in retail sentiment persists, but the exchange rate may consolidate before resuming the bearish price action amid the string of failed attempts to break below the 1.2000 handle.