EUR/USD appears to have reversed course ahead of the May high (1.2266) as European Central Bank (ECB) President Christine Lagarde endorses a dovish forward guidance for monetary policy, and fresh data prints coming out of the US may keep the exchange rate under pressure as employment is expected to increase for the fifth consecutive month.

EUR/USD extends the decline from the monthly high (1.2254) as President Lagarde pledges to support the Euro Area “over the pandemic and well into the economic recovery,” with the central bank head going onto say that the Governing Council “is committed to preserving favourable financing conditions throughout this period.”

The comments suggest the ECB is in no rush to switch gears as President Lagarde reiterates that “there are no limits to our commitment to the Euro,” and the Euro may face headwinds ahead of the next policy meeting on June 10 as “the Governing Council expects purchases under the PEPP over the current quarter to continue to be conducted at a significantly higher pace than during the first months of the year.”

As a result, the update to the US Non-Farm Payrolls (NFP) report may influence the near-term outlook for EUR/USD as the economy is expected to add 650K jobs in May following the 266K expansion the month prior, and signs of a more robust recovery may put pressure on the Federal Open Market Committee (FOMC) to change its tone as “a number of participants suggested that if the economy continued to make rapid progress toward the Committee's goals, it might be appropriate at some point in upcoming meetings to begin discussing a plan for adjusting the pace of asset purchases.”

In turn, a growing number of Federal Reserve officials may show a greater willingness to adjust the forward guidance over the coming months, and the tilt in retail sentiment looks poised to persist ahead of the FOMC rate decision on June 16 as traders have been net-short EUR/USD since April. 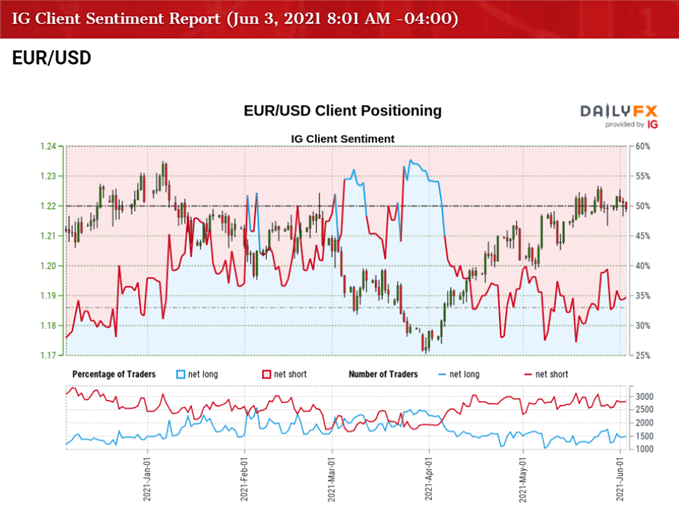 The IG Client Sentiment report shows 37.51% of traders are currently net-long EUR/USD compared to 31.18% last week, with the ratio of traders short to long standing at 1.67 to 1.

The number of traders net-long is 8.12% higher than yesterday and 5.89% lower from last week, while the number of traders net-short is 4.29% higher than yesterday and 2.31% higher from last week. The decline in net-long position could be a function of stop-loss orders getting triggered as EUR/USD remains under pressure ahead of the NFP report, while the rise in net-short interest comes as the exchange rate slips to a fresh weekly low (1.2136).

With that said, it remains to be seen if the decline from the January high (1.2350) will turn out to be a correction in the broader trend rather than a change in EUR/USD behavior as the crowding behavior from 2020 resurfaces, but the exchange rate appears to have reversed course ahead of the May high (1.2266) as it extends the series of lower highs and lows from the monthly high (1.2254).