USD/JPY approaches the May high (110.20) as Federal Reserve officials adopt an improved outlook for the US economy, and the update to the Non-Farm Payrolls (NFP) report may keep the exchange rate afloat as employment is anticipated to increase for the fifth consecutive month.

USD/JPY retraces the decline following the ISM Manufacturing survey as Fed Governor Lael Brainard insists that the “supply–demand mismatches at the sectoral level that are temporary in nature,” with the with the permanent voting-member on the Federal Open Market Committee (FOMC) going onto say that she anticipates to “see further progress in coming months” while speaking at a virtual event hosted by the Economic Club of New York.

As a result, Brainard insists that “the best way to achieve our maximum-employment and average-inflation goals is to be steady and transparent in our outcome-based approach to monetary policy while remaining attentive to the evolution of the data and prepared to adjust as needed,” and the comments suggests the FOMC will gradually change its tone in the second half of the year as “growth this year is expected to be the strongest in decades as the economy bounces back from the depressed level associated with the pandemic.”

In turn, the NFP report may fuel speculation for a looming change in Fed policy as the US economy is projected to 650K jobs in May, and it remains to be seen if the FOMC will adjust the forward guidance at the next interest rate decision on June 16 as the central bank is slated to update the Summary of Economic Projections (SEP).

Until then, USD/JPY may continue to negate what looked to be a head-and-shoulders formation as it approaches the May high (110.20), but the recent shift in retail sentiment may generate range bound conditions for Dollar Yen as the crowding behavior from 2020 appears to be resurfacing. 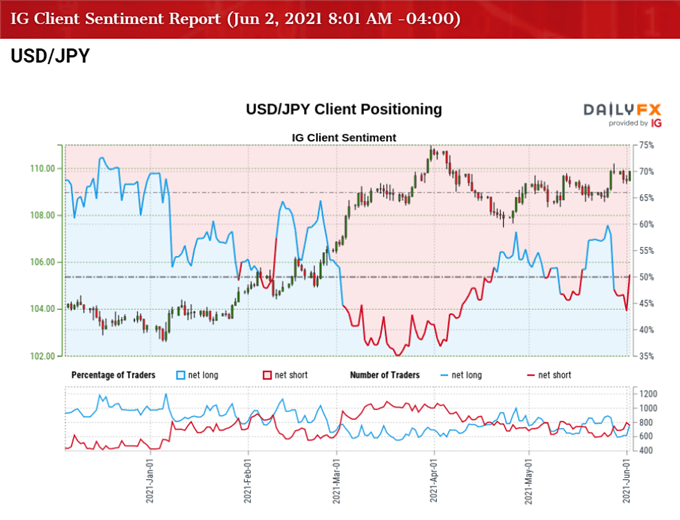 The IG Client Sentiment report shows 52.39% of traders are currently net-long USD/JPY, with the ratio of traders long to short standing at 1.10 to 1.

The number of traders net-long is 14.09% higher than yesterday and 9.94% lower from last week, while the number of traders net-short is 2.71% higher than yesterday and 20.32% higher from last week. The decline in net-long position could be a function of profit taking behavior as USD/JPY retraces the decline following the ISM Manufacturing survey, while the rise in net-short interest has alleviated the net-long bias seen in late May as 56.12% of traders were net-long the pair last week.

With that said, USD/JPY may consolidate ahead of the NFP report as the crowding behavior from 2020 appears to be resurfacing, but the decline from the March high (110.97) may turn out to be a correction rather than a change in trend as the 10-Year US Treasury yield attempts to push back above the 50-Day SMA (1.62%).