AUD/USD snaps the series of higher highs and lows from the start of the week as it fails to retain the bullish reaction to Australia’s Gross Domestic Product (GDP) report, and the exchange rate may consolidate over the coming days as the Reserve Bank of Australia (RBA) warns of “further short, sharp lockdowns like we’ve seen in a number of states over the last while.”

AUD/USD is little changed from yesterday as RBA Deputy Governor Guy Debelle recognizes that the renewed lockdown in Victoria is “a bit longer” than previous occasions, but it seems as though the central bank will retain the current course for monetary policy as “what we’ve seen with those short, sharp lockdowns is that things came back pretty quick.”

Debelle acknowledged that the “growth number today which is marginally stronger than what we had in those numbers back in May” while speaking to Australian lawmakers in Canberra, and the comments suggests Governor Philip Lowe and Co. are in no rush to switch gears as the central bank is on track to complete “the second $100 billion of purchases under the government bond purchase program in September.”

In turn, Governor Philip Lowe and Co. may continue to endorse a wait-and-see approach at the next meeting on July 6 as “the economic recovery in Australia is stronger than earlier expected and is forecast to continue, and AUD/USD may continue to track the May range as both the RBA and Federal Reserve appear to be on a preset course. 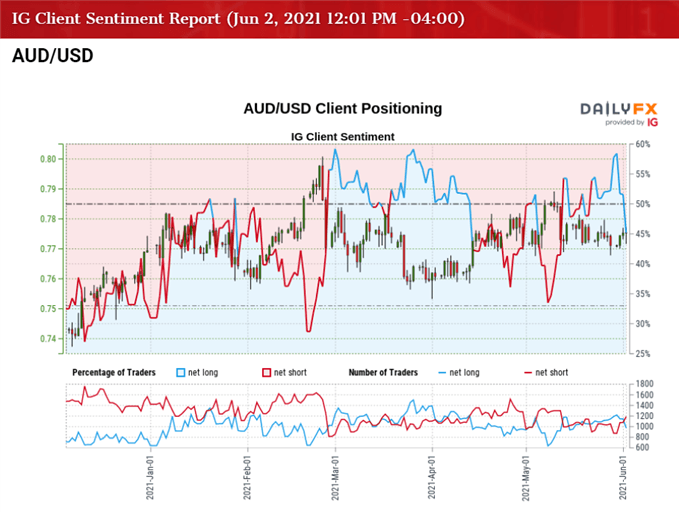 The number of traders net-long is 3.05% higher than yesterday and 9.52% higher from last week, while the number of traders net-short is 7.10% lower than yesterday and 1.49% lower from last week. The rise in net-long position comes amid the string of failed attempts to test the May low (0.7675), while the marginal decline in net-short interest could be a function of profit taking behavior as AUD/USD tags a fresh weekly high (0.7773) following the update to Australia’s GDP report.

With that said, it remains to be seen if the decline from the February high (0.8007) will turn out to be a correction in the broader trend or a change in AUD/USD behavior amid the flip in retail sentiment, but the exchange rate continue to trade within a defined range amid the string of failed attempts to test the May low (0.7675).