USD/CAD Rate to Face Another Decline in Canada Employment

USD/CAD bounces back from the session low (1.2007) in an attempt to retrace the decline following the ISM Manufacturing survey, but the exchange rate may continue to search for support as it fails to hold above the May low (1.2013).

USD/CAD Rate to Face Another Decline in Canada Employment

USD/CAD may approach the May 2015 low (1.1920) as the Federal Reserve braces for a transitory rise in inflation, but the update to Canada’s Employment report may spark a bearish reaction in the Canadian Dollar as job growth is anticipated to contract for the second consecutive month.

Canada is projected to shed 20K jobs in May following the 207.1K contraction the month prior, while the Unemployment Rate is expected to widen to 8.2% from 8.1% during the same period. In response, the Bank of Canada (BoC) may move to the sidelines after tapering its quantitative easing (QE) program in April, and the central bank may carry out a wait-and-see approach over the coming months as “the recovery continues to require extraordinary monetary policy support.”

As a result, the Canadian Dollar may face headwinds ahead of the next BoC interest rate decision on June 9 as Governor Tiff Macklem and Co. pledge to keep “the policy interest rate at the effective lower bound until economic slack is absorbed so that the 2 percent inflation target is sustainably achieved,”but broader outlook for USD/CAD remains tilted to the downside as the exchange rate trades to a fresh yearly low (1.2007) in June.

At the same time, the crowding behavior carried over from last year looks poised to persist as retail traders have been net-long USD/CAD since May 2020, with the IG Client Sentiment report showing 83.04% of traders still net-long the pair as the ratio of traders long to short stands at 4.90 to 1. 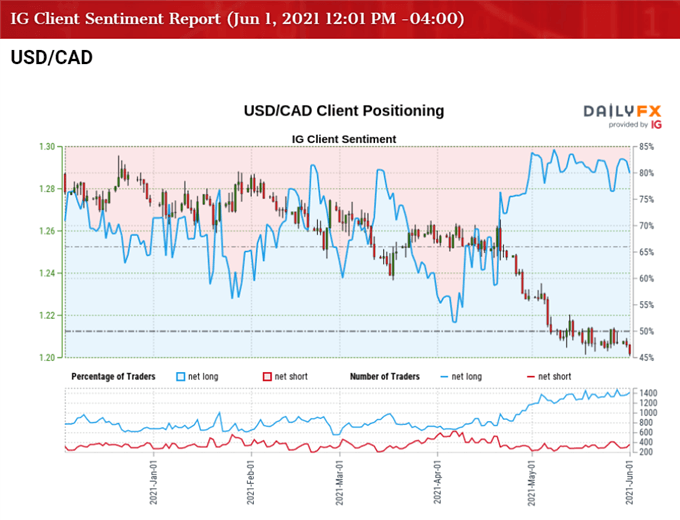 The number of traders net-long is 11.81% higher than yesterday and 7.94% higher from last week, while the number of traders net-short is 6.34% lower than yesterday and 4.69% lower from last week. The rise in net-long interest has fueled the tilt in retail sentiment as 78.68% of traders were net-long USD/CAD on May 20, while the decline in net-short position could be a function of profit-taking behavior as the exchange rate trades to a fresh yearly low (1.2007) in June.

With that said, USD/CAD may continue to exhibit a bearish trend in 2021 as the tilt in retail sentiment persists, but Canada’s Employment report may sway the exchange rate over the coming days as job growth is anticipated to contract for the second consecutive month.