EUR/USD breaks out of the range bound price action carried over from the previous week as a growing number of Federal Reserve officials warn of a transitory rise in inflation, and the exchange rate may continue to retrace the decline from earlier this year as it clears the February high (1.2243) in May.

EUR/USD trades to a fresh monthly high (1.2266) as Kansas City Fed President Esther George, who serves on the Federal Open Market Committee (FOMC) in 2022, endorses a dovish forward guidance for monetary policy, and it seems as though Fed officials are in no rush to scale back the emergency measures as the US remains “more than 8 million jobs shy relative to pre-pandemic levels.”

President George acknowledged the improvements in the economy as “the outlook is so strong that the discussion has quickly shifted from demand shortfalls to supply constraints,” but went onto say that the “factors that have boosted current inflation seem likely to fade over time” while speaking at the Kansas City Fed’s Agricultural Symposium.

The comments suggests the FOMC will retain the current course for monetary policy as the central bank plans to “maintain its purchases of Treasuries and mortgage-backed securities until substantial further progress has been made towards these employment and inflation goals,” and it remains to be seen if the committee will adjust the forward guidance at the next interest rate decision on June 16 as Chairman Jerome Powell and Co. are slated to update the Summary of Economic Projections (SEP).

Until then, EUR/USD may continue to retrace the decline from earlier this year as a growing number of Fed officials brace for a transitory rise in inflation, and a further appreciation in the exchange rate may fuel the tilt in retail sentiment as the crowding behavior from 2020 resurfaces. 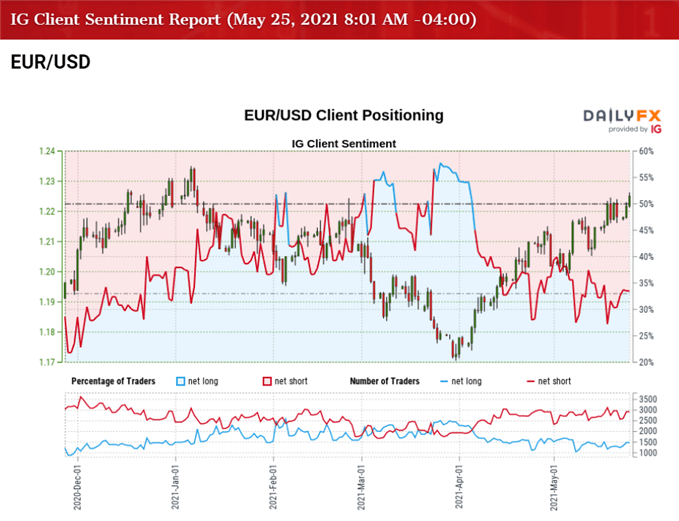 The IG Client Sentiment report shows 31.18% of traders are currently net-long EUR/USD, with the ratio of traders short to long standing at 2.21 to 1.

The number of traders net-long is 13.67% lower than yesterday and 3.84% higher from last week, while the number of traders net-short is 17.15% higher than yesterday and 7.84% higher from last week. The rise in net-long position has helped to alleviate the crowding behavior as only 28.73% of traders were net-long EUR/USD last week, but the tilt in retail sentiment looks poised to persist amid the rise in net-short interest.

With that said, the decline from the January high (1.2350) may turn out to be a correction in the broader trend rather than a change in EUR/USD behavior as the crowding behavior from 2020 resurfaces, and the exchange rate may continue to trade to fresh monthly highs over the coming days as it breaks out of the range bound price action carried over from the previous week.