NZD/USD attempts to retrace the decline from the previous week ahead of the Reserve Bank of New Zealand (RBNZ) interest rate decision on May 26, but more of the same from Governor Adrian Orr and Co. may drag on the New Zealand Dollar as the central bank appears to be in no rush to switch gears.

NZD/USD holds above the 50-Day SMA (0.7138) as it continues to negate the head-and-shoulders formation from earlier this year, but the exchange rate may face range bound conditions ahead of the RBNZ meeting as the central bank is widely expected to keep the official cash rate (OCR) at the record low of 0.25%.

It seems as though the RBNZ will retain the ‘least regrets’ framework as the central bank warns that “supply chain disruptions could potentially constrain domestic activity in the near term,” and Governor Arian Orr and Co. may keep the door open to further support the economy as officials remain “prepared to lower the OCR if required.”

The dovish forward guidance for monetary policy may spark a bearish reaction in the New Zealand Dollar as the RBNZ pledges to “not remove monetary stimulus until it had confidence that it is sustainably achieving the consumer price inflation and employment objectives,” but the tilt in retail sentiment looks poised to persist as the crowding behavior from 2020 resurfaces. 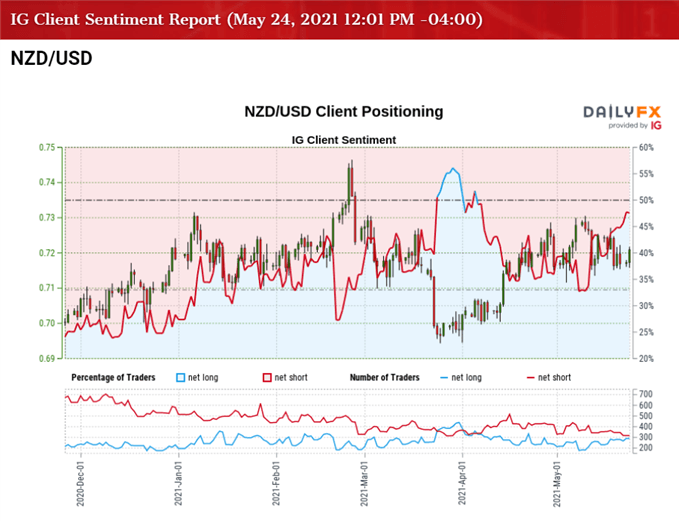 The IG Client Sentiment report shows 47.55% of traders are currently net-long NZD/USD, with the ratio of traders short to long standing at 1.10 to 1.

The number of traders net-long is 6.87% higher than yesterday and 19.16% higher from last week, while the number of traders net-short is 7.19% higher than yesterday and 10.68% lower from last week. The rise in net-long position has helped to alleviate the tilt in retail sentiment as 45.06% of traders were net-long NZD/USD last week, while the decline in net-short interest comes as the exchange rate attempts to retrace the decline from the previous week.

With that said, the decline from the yearly high (0.7465) may turn out to be a correction in the broader trend rather than a key reversal as the crowding behavior from 2020 resurfaces, and the exchange rate may continue to negate the head-and-shoulders formation from earlier this year as it holds above the 50-Day SMA (0.7138).