EUR/USD tracks the range bound price action from earlier this week as European Central Bank (ECB) President Christine Lagarde offers a dovish guidance following a Eurogroup meeting in Lisbon, but looming developments in the 50-Day SMA (1.1983) may instill a bullish outlook for the exchange rate as the moving average appears to be establishing a positive slope.

EUR/USD appears to be under pressure as ECB President Lagarde insists that the rise in Euro Area inflation is “a temporary nature and rely on temporary factors,” with the central bank head going onto say that it’s “unnecessary to debate longer term issues” amid the uncertainty surrounding the economic outlook.

The comments suggests the ECB is in no rush to switch gears as Lagarde emphasizes that “policymakers needed to provide the right bridge across the pandemic, well into the recovery,” and the Euro may face headwinds ahead of the next meeting on June 10 as the Governing Council “expects purchases under the PEPP (pandemic emergency purchase programme) over the current quarter to continue to be conducted at a significantly higher pace than during the first months of the year.” 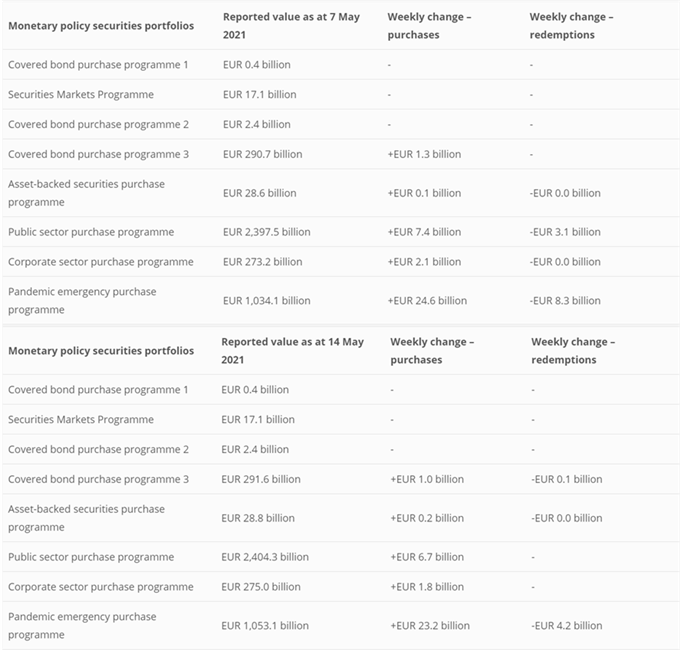 However, the ECB’s consolidated financial statement showed purchases under the PEPP slowing for the second week, with the central bank adding EUR 23.2 billion in the week ending May 14 compared to the EUR 24.6 billion expansion the week prior. A further slowdown in the PEPP may keep EUR/USD afloat as a growing number of Federal Reserve officials brace for a transitory rise in inflation, but a further appreciation in the exchange rate may fuel the tilt in retail sentiment as the crowding behavior from 2020 resurfaces. 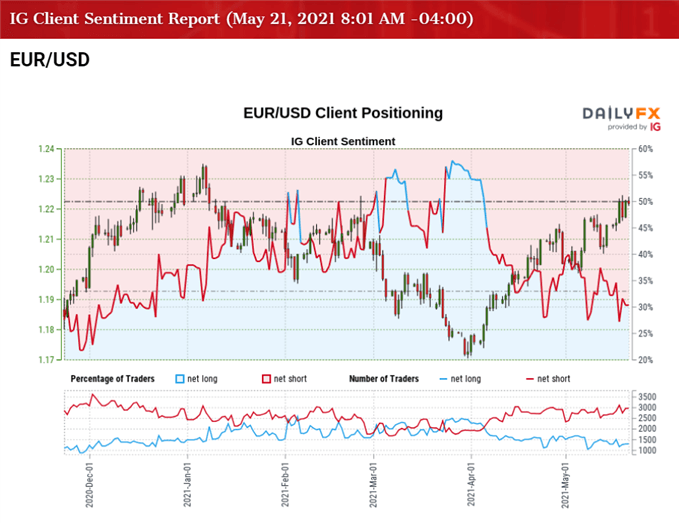 The IG Client Sentiment report shows only 28.73% of traders are currently net-long EUR/USD, with the ratio of traders short to long standing at 2.48 to 1.

The number of traders net-long is 14.08% lower than yesterday and 18.04% lower from last week, while the number of traders net-short is 11.55% higher than yesterday and 21.34% higher from last week. The decline in net-long position could be a function of profit taking behavior as EUR/USD appears to be stuck in a narrow range, while the jump in net-short interest has reinforced the tilt in retail sentiment as 28.18% of traders were net-long the pair earlier this week.

With that said, the decline from the January high (1.2350) may turn out to be a correction in the broader trend rather than a change in EUR/USD behavior as the crowding behavior from 2020 resurfaces, and looming developments in the 50-Day SMA (1.1983) may instill a bullish outlook for the exchange rate as the moving average appears to be establishing a positive slope.