USD/CAD attempts to retrace the advance following the update to Canada’s Consumer Price Index (CPI) as it pulls back from a fresh weekly high (1.2144), but the exchange rate may continue to carve a series of higher highs and lows as the Relative Strength Index (RSI) bounces back from oversold territory.

USD/CAD appears to have reversed course ahead of the 1.2000 handle even though the 3.4% print for Canada’s CPI marks the highest reading since May 2011 as the core rate shows a less pronounced rise in inflation, with the figure widening to 2.1% from 1.9% during the same period.

It remains to be seen if Canada’s Retail Sales report will sway USD/CAD as the update for March showed household spending increasing 4.8% versus forecasts for a 4.0% print, and signs of a stronger recovery may spark a bullish reaction in the Canadian Dollar as the Bank of Canada (BoC) tapers its quantitative easing (QE) program.

It seems as though the BoC will gradually scale back its emergency measures throughout the remainder of the year as the central bank upgrades its economic outlook and projects “real GDP growth of 6 ½ percent in 2021, moderating to around 3 ¾ percent in 2022 and 3 ¼ percent in 2023,” but the crowding behavior carried over from last year looks poised to persist as retail traders have been net-long USD/CAD since May 2020. 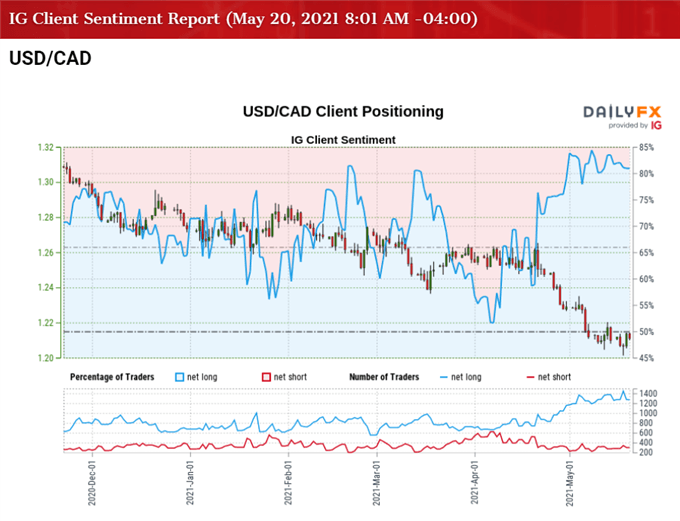 The IG Client Sentiment report shows 78.68% of traders are still net-long USD/CAD, with the ratio of traders long to short standing at 3.69 to 1.

The number of traders net-long is 7.40% lower than yesterday and 9.00% lower from last week, while the number of traders net-short is 14.10% higher than yesterday and 17.49% higher from last week. The decline in net-long position has helped to alleviate the tilt in retail sentiment as 81.62% of traders were net-long USD/CAD last week, while the rise in net-short interest comes as the exchange rate pulls back from a fresh weekly high (1.2144).

With that said, USD/CAD may continue to exhibit a bearish trend in 2021 as the tilt in retail sentiment persists, but the exchange rate may continue to carve a series of higher highs and lows over the coming days as the Relative Strength Index (RSI) bounces back from oversold territory.