EUR/USD appears to be under pressure after taking out the February high (1.2243) as the European Central Bank (ECB) warns that the “risks to financial stability remain elevated,” but the exchange rate may continue to exhibit a bullish behavior as it extends the series of higher highs and lows from earlier this week.

The four day advance in EUR/USD seems to be unraveling as the ECB’s third issue of the Financial Stability Review (FSR) emphasizes that “solvency risks in the corporate sector are set to rise as public support measures fade,” with the update going onto say that “slack in labour markets and subdued investment could point to a sluggish recovery.”

As a result, the ECB acknowledges that “targeting policy support towards viable firms remains challenging,” and it seems as though the Governing Council will retain the current course for monetary policy as the central bank warns that “a sharp rise in interest rates could prompt an adjustment in risk asset valuations, with possible adverse implications for financial stability.”

Moreover, the ECB warns that “while fiscal and financial policy measures have indirectly supported non-banks’ asset quality so far, credit risk could trigger valuation losses over the coming months,” and it remains to be seen if President Christine Lagarde and Co. will take additional steps to support the Euro Area at its next meeting on June 10 as the central bank states that “extensive policy support, particularly for corporates, could gradually move from being broad based to more targeted.”

Until then, the Euro may face headwinds as the ECB recognizes that the “Euro area recovery has been delayed, with the impact of the pandemic increasingly concentrated in some sectors,” but the bullish price action in EUR/USD may fuel a larger tilt in retail sentiment as the crowding behavior from 2020 resurfaces. 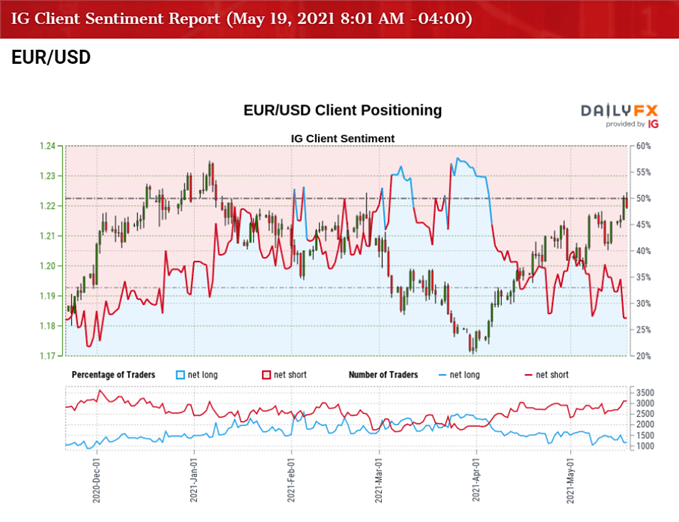 The IG Client Sentiment report shows only 28.18% of traders are net-long EUR/USD, with the ratio of traders short to long standing at 2.55 to 1.

The number of traders net-long is 10.65% lower than yesterday and 19.52% lower from last week, while the number of traders net-short is 7.13% higher than yesterday and 9.90% higher from last week. The decline in net-long position could be a function of profit taking behavior as EUR/USD pulls back from a fresh monthly high (1.2245), while the rise in net-short interest has spurred a further tilt in retail sentiment as 35.87% of traders were net-long the pair earlier this week.

With that said, the decline from the January high (1.2350) may turn out to be a correction in the broader trend rather than a change in EUR/USD behavior as the crowding behavior from 2020 resurfaces, and the exchange rate may continue to exhibit a bullish behavior after clearing the February high (1.2243)as it extends the series of higher highs and lows from earlier this week.