NZD/USD approaches the monthly high (0.7305) as a growing number of Federal Reserve officials warn of a transitory rise in inflation, and the Federal Open Market Committee (FOMC) Minutes may keep the exchange rate afloat as the central bank appears to be in no rush to scale back its emergency measures.

NZD/USD looks poised to retrace the decline following the update to the US Consumer Price Index (CPI) as Fed officials retain a dovish forward guidance for monetary policy, and the FOMC Minutes may generate a bearish reaction in the US Dollar as the central bank shows little intentions of switching gears ahead of the second half of the year.

It seems as though the FOMC is in no rush to scale back its emergency measures as the committee warns that it will “take some time for substantial further progress to be achieved,” and it remains to be seen if Chairman Jerome Powell and Co. will change its tone at its next interest rate decision on June 16 as the central bank is slate to update the Summary of Economic Projections (SEP).

Until then, NZD/USD may continue to trade within in the March range as it negates the head-and-shoulders formation from earlier this year, but the renewed tilt in retail sentiment may lead to a test of the March high (0.7307) as the crowding behavior from 2020 resurfaces. 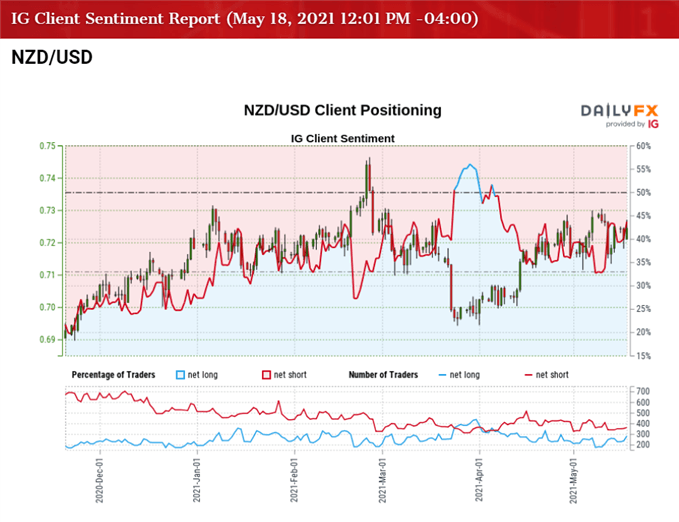 The IG Client Sentiment report shows 45.06% of traders are currently net-long NZD/USD, with the ratio of traders short to long standing at 1.22 to 1.

The number of traders net-long is 15.33% higher than yesterday and 27.00% higher from last week, while the number of traders net-short is 4.43% lower than yesterday and 7.09% lower from last week. The jump in net-long interest has helped to alleviate the tilt in retail sentiment as only 37.50% of traders were net-long NZD/USD last week, while the decline in net-short position comes as the exchange rate approaches the monthly high (0.7305).