EUR/USD attempts to retrace the decline following the update to the US Consumer Price Index (CPI) as a growing number of Federal Reserve officials warn of a transitory rise in inflation, and the exchange rate may stage another attempt to test the February high (1.2243) as it carves a series of higher highs and lows.

EUR/USD appears to have reversed course ahead of the monthly low (1.1986) as comments from Fed Vice Chair Richard Clarida largely mirrors the dovish remarks from Governor Christopher Waller, with the recent advance in the exchange rate generating a positive slope in the 50-Day SMA (1.1962) as the moving average snaps back from the 200-Day SMA (1.1953).

Looking ahead, it remains to be seen if the Federal Open Market Committee (FOMC) Minutes will influence EUR/USD as Vice Chair Richard Clarida emphasizes that “there’s still a deep hole in the labor market,” with the permanent voting-member on FOMC going onto say that “it may take more time to reopen a $20 trillion economy than it did to shut it down”while speaking at the Atlanta Fed’s 2021 Financial Markets Conference.

As a result, Clarida pledges to “give advance warning” before scaling back the emergency measures, and it seems as though the majority of the FOMC will continue to strike a dovish tone ahead of the next interest rate decision on June 16 as the vice chair argues that the US economy “has not made substantial further progress” amid the below-forecast print for the April Non-Farm Payrolls (NFP) report.

In turn, EUR/USD may stage another attempt to test the February high (1.2243) as the FOMC appears to be on track to retain the current course for monetary policy, and a further appreciation in the exchange rate may fuel a larger tilt in retail sentiment as the crowding behavior from 2020 resurfaces. 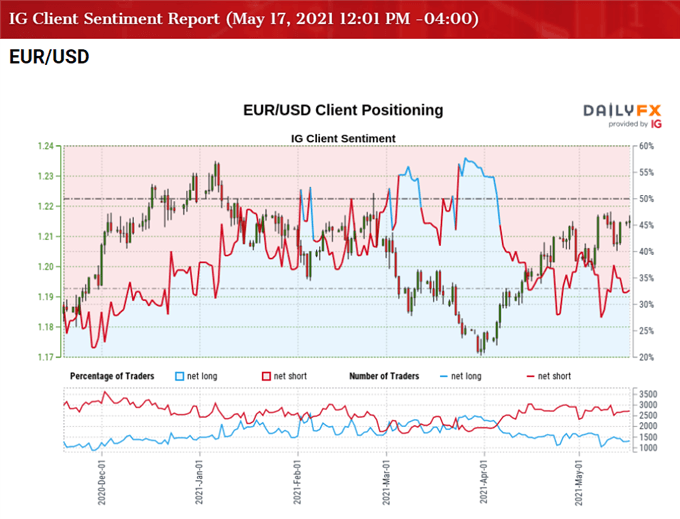 The IG Client Sentiment report shows 35.87% of traders are currently net-long EUR/USD, with the ratio of traders short to long standing at 1.79 to 1.

The number of traders net-long is 17.25% higher than yesterday and 8.84% higher from last week, while the number of traders net-short is 2.95% higher than yesterday and 8.15% lower from last week. The rise in net-long interest has helped to alleviate the crowding behavior as only 34.89% of traders were net-long EUR/USD last week, while the decline in net-short position comes as the exchange rate appears to have reversed course ahead of the monthly low (1.1986). 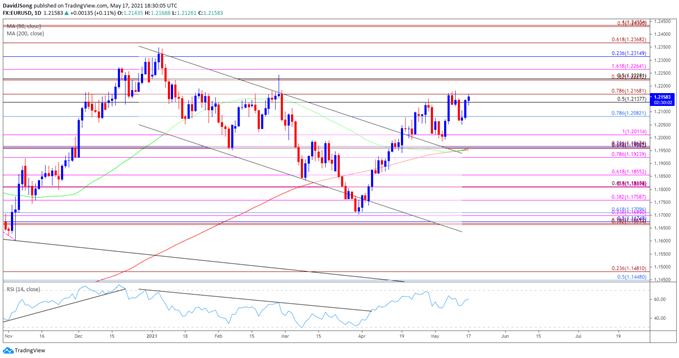