EUR/USD pulls back from a fresh monthly high (1.2182) even as the European Central Bank (ECB) slows the pace of the pandemic emergency purchase programme (PEPP), and the exchange rate may consolidate over the remainder of the week as itsnaps the series of higher highs and lows from the previous week.

The recent rally in EUR/USD appears to have stalled ahead of the February high (1.2243) as it gives back the advance following the US Non-Farm Payrolls (NFP) report, and data prints coming out of the world’s largest economy may continue to sway the exchange rate as it slips to a fresh weekly low (1.2072) following the update to the Consumer Price Index (CPI).

It remains to be seen if the US Retail Sales report will sway EUR/USD as the sharp price in both the headline and core CPI triggers a rise in longer-dated Treasury yields, but a slowdown in household consumption may trigger a bearish reaction in the US Dollar as it encourages the Federal Reserve to retain the current course for monetary policy.

Meanwhile, the account of the European Central Bank (ECB) meeting may go unnoticed as the Governing Council “expects purchases under the PEPP over the current quarter to continue to be conducted at a significantly higher pace than during the first months of the year,” and more of the same from President Christine Lagarde and Co. may do little to influence the near-term outlook for EUR/USD as the central bank appears to be in no rush to scale back its emergency measures. 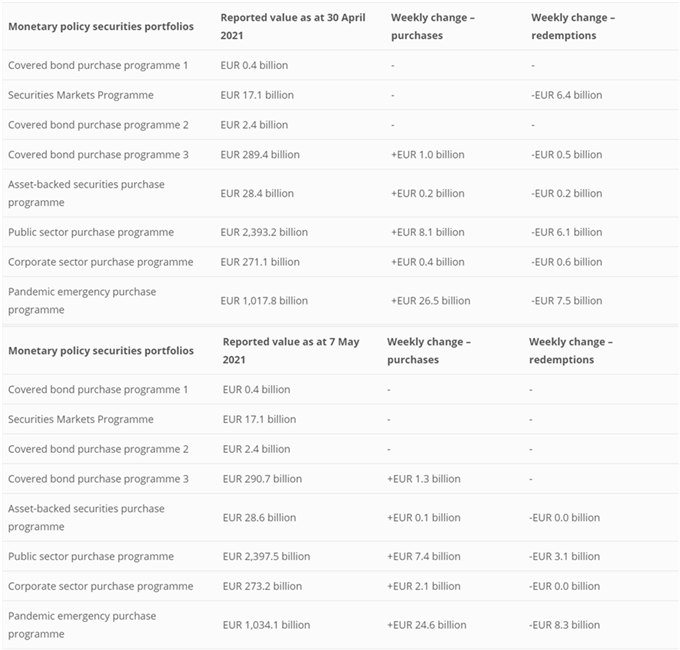 However, recent figures coming out of the ECB showed the PEPP increasing EUR 24.6 billion in the week May 7 after expanding EUR 26.5 billion the week prior, and a further slowdown in the pace of asset purchases may keep EUR/USD afloat especially as the crowding behavior from 2020 resurfaces. 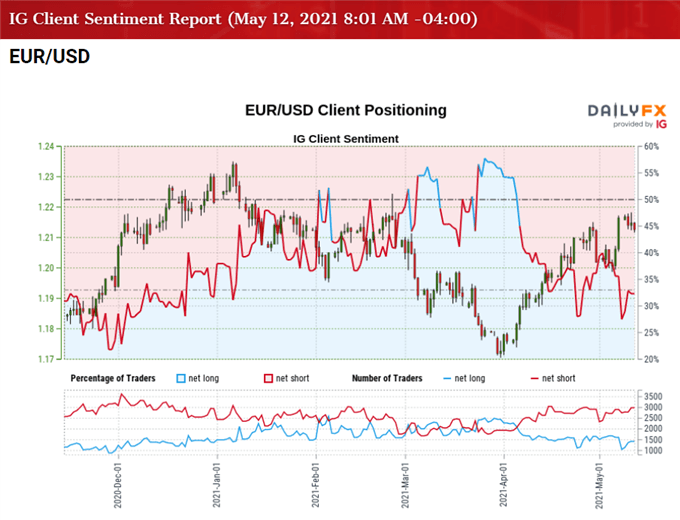 The IG Client Sentiment report shows only 34.89% of traders are currently net-long EUR/USD, with the ratio of traders short to long standing at 1.87 to 1.

The number of traders net-long is 3.23% higher than yesterday and 14.22% lower from last week, while the number of traders net-short is 0.69% lower than yesterday and 1.49% higher from last week. The decline in net-long position has generated a further tilt in retail sentiment as 37.41% of traders were net-long EUR/USD at the end of April, while the marginal rise in net-short position comes as the recent rally in the exchange rate appears to have stalled ahead of the February high (1.2243).

With that said, the broader outlook for EUR/USD remains constructive as it breaks out of the descending channel from earlier this year, but the exchange rate may consolidate over the remainder of the week as it snaps the series of higher highs and lows from the previous week. 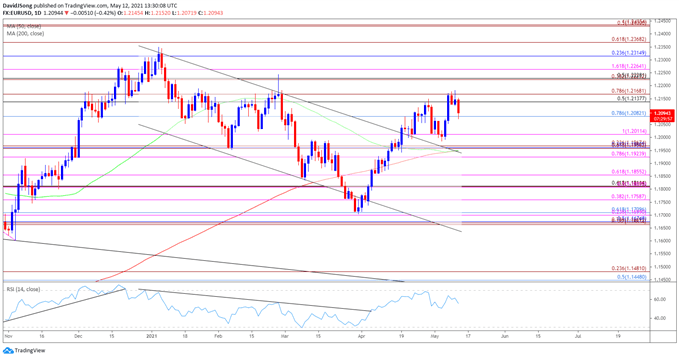