USD/CAD appears to be on track to test the September 2017 low (1.2061) after clearing the January 2018 low (1.2247), and the oversold reading in the Relative Strength Index (RSI) may continue to coincide with a further decline in the exchange rate like the behavior seen in December.

USD/CAD bounces back from a fresh yearly low (1.2079) as it struggles to extend the series of lower highs and lows carried over from the previous week, and the exchange rate may consolidate ahead of the key US data prints on tap for later this week as the update to the Consumer Price Index (CPI) is anticipated to show above-target inflation.

The headline and core CPI are both projected to exceed the Federal Reserve’s 2% inflation target in April, while US Retail Sales are expected to increase a marginal 1.0% after expanding 9.8% in March. It remains to be seen if the fresh figures will influence the monetary policy outlook as the Federal Open Market Committee (FOMC) braces for a transitory rise in inflation, but a slowdown in household consumption may keep the central bank on its current path as Richmond Fed President Thomas Barkin, who votes on the FOMC in 2021,warns that the 266K rise in April is “nowhere near as strong as I expected.”

Meanwhile, the larger-than-expected contraction in Canada Employment may undermine the Bank of Canada’s (BoC) ability to scale back its emergency measures as the “Governing Council judged that the recovery still needs extraordinary support from monetary policy,” and the central bank may move to the sidelines after tapering its quantitative easing (QE) program as “further adjustments to the pace of net purchases will be guided by our ongoing assessment of the strength and durability of the economic recovery.”

In turn, the Canadian Dollar may face headwinds ahead of the next BoC interest rate decision on June 9 as the BoC insist that “further adjustments to our QE program will be gradual,” but the crowding behavior carried over from last year looks poised to persist as retail traders have been net-long USD/CAD since May 2020. 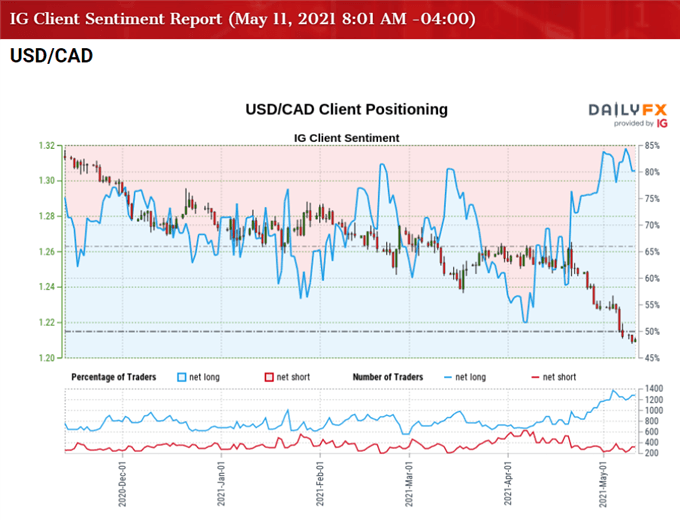 The IG Client Sentiment report shows 76.93% of traders are still net-long USD/CAD, with the ratio of traders long to short standing at 3.33 to 1.

With that said, USD/CAD appears to be on track to test the September 2017 low (1.2061) as the crowding behavior from 2020 persists, and the oversold reading in the Relative Strength Index (RSI) may continue to coincide with a further decline in the exchange rate like the behavior seen in December. 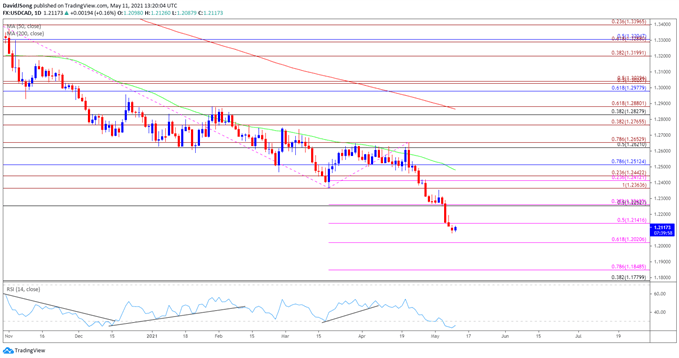