NZD/USD gives back the advance following the US Non-Farm Payrolls (NFP) report after struggling to test the March high (0.7303), but the exchange rate may continue to negate the head-and-shoulders formation from earlier this year amid the failed attempt to close below the 50-Day SMA (0.6957).

NZD/USD has taken out the April range as the 266K NFP print curbs speculation for a shift in monetary policy, and the Federal Reserve may continue to utilize its emergency measures over the coming months as the central bank braces for a transitory rise in inflation.

than before the pandemic,” and the central bank appears to be in no rush to switch gears as “New Zealand’s economic prospects ultimately depend on the global containment of the pandemic and on the recovery of trading-partner economies.”

At the same time, the RBNZ acknowledged that longer-term yields have recovered as “downside risks to economic growth appear less likely and inflation expectations have lifted,” but went onto say that “further increases in long-term interest rates could expose vulnerabilities in asset valuations and drive greater market volatility” as major central banks rely on their emergency tools to achieve their policy targets.

In turn, the RBNZ may keep the door open to implement a negative interest rate policy (NIRP) as Governor Adrian Orr and Co. remain “prepared to lower the Official Cash Rate (OCR) if required,” and the central bank may continue to offer a dovish forward guidance at its next meeting on May 26 as “the Committee agreed that any increase in bank lending rates would be premature given the current economic outlook.”

Until then, NZD/USD may continue to track the March range as it attempts to negate the head-and-shoulders formation from earlier this year, but the renewed tilt in retail sentiment looks poised to persist as the crowding behavior from 2020 resurfaces. 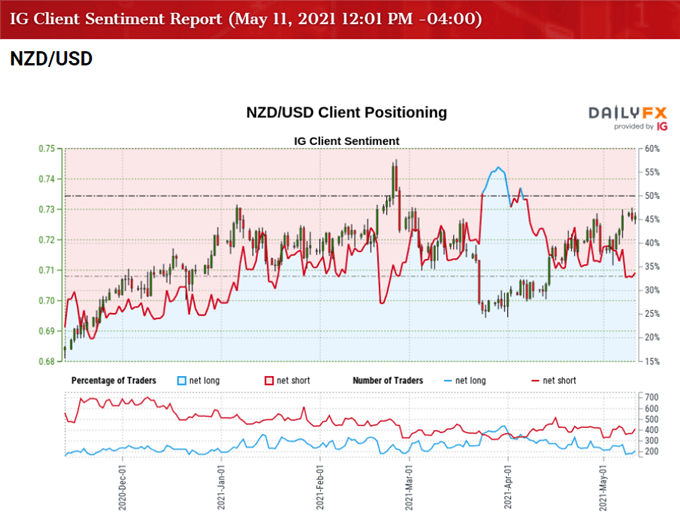 The IG Client Sentiment report shows only 37.50% of traders are net-long NZD/USD, with the ratio of traders short to long standing at 1.67 to 1.

The number of traders net-long is 10.23% higher than yesterday and 5.95% lower from last week, while the number of traders net-short is 5.73% lower than yesterday and 3.42% lower from last week. The decline in net-long position comes as NZD/USD takes out the April range, while the decline in net-short interest has done little to alleviate the crowding behavior as 38.12% of traders were net-long the pair during the previous week.

With that said, the decline from the yearly high (0.7465) may turn out to be a correction in the broader trend rather than a key reversal as the crowding behavior from 2020 resurfaces, but the failed attempt to test the March high (0.7303) may generate range bound conditions in the exchange rate as it snaps the series of higher highs and lows from the previous week. 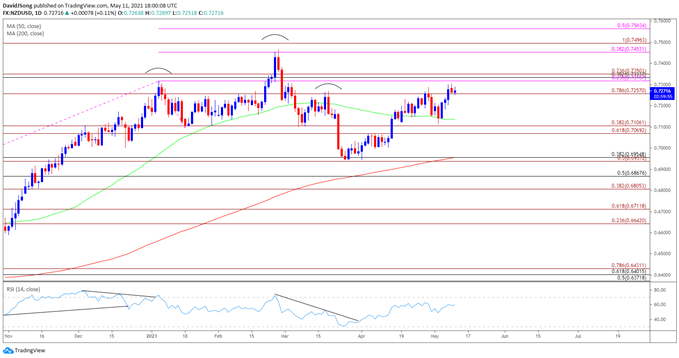