USD/JPY struggles to hold above the 50-Day SMA (108.92) following the US Non-Farm Payrolls (NFP) report, but the exchange rate may continue to trade within the confines of the April range as the recent the break above the left shoulder removes the threat of a head-and-shoulders formation.

USD/JPY attempts to retrace the bearish reaction to the 266K NFP print amid the rebound in longer-dated US Treasury yields, and the exchange rate may face range bound conditions ahead of the key data prints on tap for later this week as it struggles to extend the series of lower highs and lows from the previous week.

The update to the US Consumer Price Index (CPI) is anticipated to show a material rise in the headline and core rate of inflation, with both figures expected to surpass the Federal Reserve’s 2% target in April, while Retail Sales are projected to increase a mere 1.0% after expanding 9.8% in March.

Signs of stronger price growth may do little to influence USD/JPY as the Federal Open Market Committee (FOMC) braces for a transitory rise in inflation, and the slowdown in household consumption may ultimately grab the central bank’s attention as Chairman Jerome Powell and Co. emphasize that “the economy is a long way from our goals.”

Until then, USD/JPY may continue to track swings in longer-dated US yields even though the FOMC retains the current course for monetary policy, but the recent flip in retail sentiment may largely coincide with a further appreciation in the exchange rate like the behavior seen earlier this year. 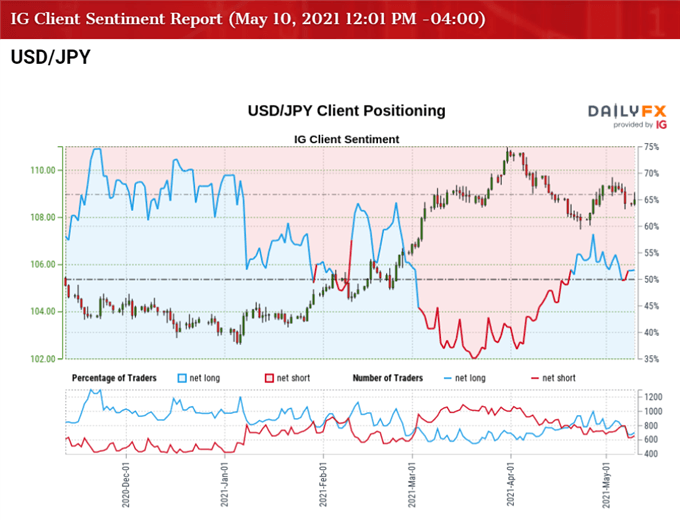 The IG Client Sentiment report shows 47.12% of traders are currently net-long USD/JPY, with the ratio of traders short to long standing at 1.12 to 1.

The number of traders net-long is 2.54% higher than yesterday and 4.47% lower from last week, while the number of traders net-short is 21.61% higher than yesterday and 11.93% higher from last week. The decline in net-long position comes as USD/JPY struggles to hold above the 50-Day SMA (108.92), while the jump in retail short interest has spurred a flip in retail sentiment as 55.17% of traders were net-long the pair during the previous week.

With that said, the decline from the March high (110.97) may turn out to be a correction rather than a change in trend if the recent flip in retail sentiment mimics the crowding behavior from earlier this year, and the exchange rate may continue to trade within the confines of the April range as thebreak above the left shoulder removes the threat of a head-and-shoulders formation.