The price of oil pulls back from a fresh monthly high ($66.76) despite a larger-than-expected contraction in US inventories, but signs of subdued supply may keep crude prices afloat as US output remains at its lowest level since 2018.

The recent rally in the price of oil appears to be stalling ahead of the March high ($67.98) as it fails to extend the series of higher highs and lows from the start of the week, and crude prices may trade within a defined range with the Organization of the Petroleum Exporting Countries (OPEC) stay on track to gradually restore production over the coming months.

Fresh data prints coming out of the US may encourage OPEC and its allies to uphold the production adjustments table at the next Joint Ministerial Monitoring Committee (JMMC) meeting on June 1 as crude inventories contract 7.99M in the week ending April 30 to mark the January.

At the same time, a deeper look at the figures coming out of the Energy Information Administration (EIA) showed US field production holding steady at 10,900K for the second week, and expectations for stronger consumption along with signs of subdued supply instills a bullish outlook for the price of oil as OPEC’s most recent Monthly Oil Market Report (MOMR) emphasizes that “oil demand in the 2H21 is projected to be positively impacted by a stronger economic rebound than assumed last month.”

With that said, the underlying fundamentals may keep the price of oil afloat as US output remains at its lowest level since 2018, but lack of momentum to test the March high ($67.98) may keep crude prices within a defined range as it fails to extend the series of higher highs and lows from the start of the week. 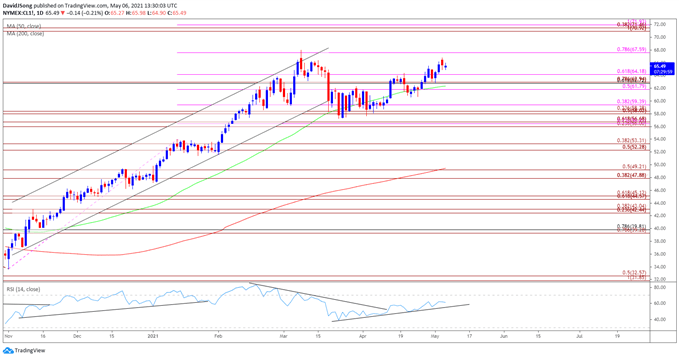