The recent depreciation in USD/CAD appears to have stalled ahead of the January 2018 low (1.2247) as it defends the April low (1.2266), but looming developments in the Relative Strength Index (RSI) may indicate a further decline in the exchange rate if the oscillator breaks below 30 and pushes into oversold territory.

USD/CAD trades within a narrow range as it fails to extend the series of lower highs and lows following the Federal Reserve interest rate decision, and the exchange rate may continue to consolidate ahead of the key data prints on tap for later this week as Fed officials strike a dovish forward guidance for monetary policy.

The employment reports coming out of the US and Canada may sway the near-term outlook for USD/CAD as the world’s largest economy is anticipated to add 978K jobs in April, while its Canadian counterpart is expected to shed 175K jobs during the same period.

It remains to be seen if the updated NFP report will influence the monetary policy outlook as Fed officials are slated to update the Summary of Economic Projections (SEP) at the next quarterly meeting in June, but it seems as though the Federal Open Market Committee (FOMC) is in no rush to scale back its emergency measures as New York Fed President John Williams, a permanent voting-member on the FOMC, warns that “the data and conditions we are seeing now are not nearly enough for the FOMC to shift its monetary policy stance.”

In turn, the diverging paths for monetary policy may keep USD/CAD under pressure as the Bank of Canada (BoC) tapers its quantitative easing (QE) program, and the crowding behavior carried over from last year looks poised to persist as retail traders have been net-long USD/CAD since May 2020. 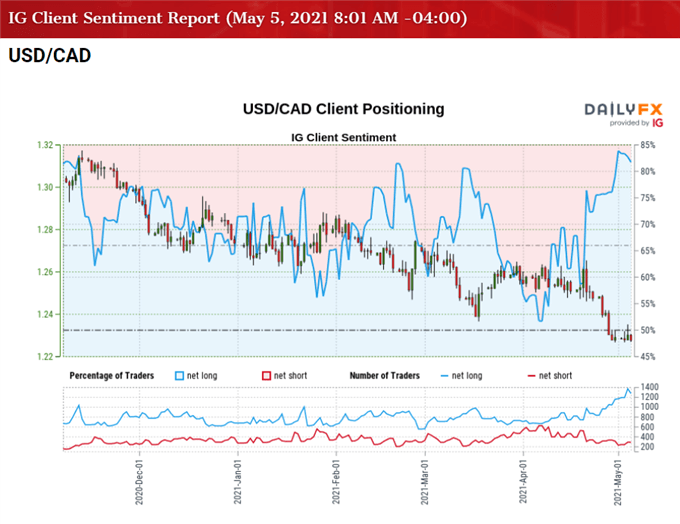 The IG Client Sentiment report shows a whopping 82.29% of traders are currently net-long USD/CAD, with the ratio of traders long to short standing at 4.65 to 1.

The number of traders net-long is 1.93% lower than yesterday and 20.80% higher from last week, while the number of traders net-short is 4.04% lower than yesterday and 15.43% lower from last week. The rise in net-long position has spurred an even greater tilt in retail sentiment as 78.84% of traders were net-long USD/CAD last week, while the decline in net-short position comes as the exchange rate fails to extend the bearish price series following the Fed rate decision.

With that said, USD/CAD may stage further attempts to test the January 2018 low (1.2247) as the tilt in retail sentiment persists, and looming developments in the Relative Strength Index (RSI) may indicate a further decline in the exchange rate if the oscillator breaks below 30 and pushes into oversold territory. 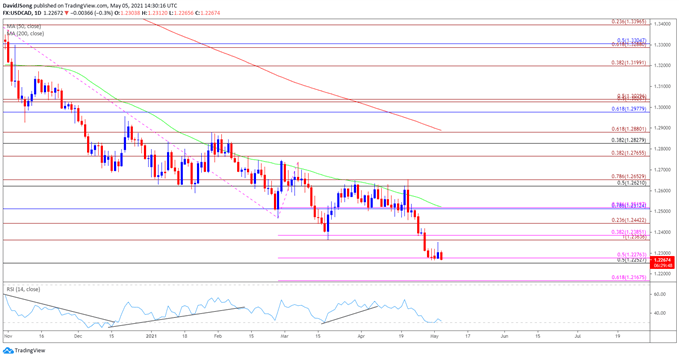