EUR/USD Breakout Stalls as RSI Reveres Ahead of Overbought Territory

EUR/USD appears to be reversing course ahead of the February high (1.2243) as it gives back the advance following the Federal Reserve interest rate decision, with the exchange rate initiating a series of lower highs and lows as the Relative Strength Index (RSI) pulls back ahead of overbought territory.

EUR/USD Breakout Stalls as RSI Reveres Ahead of Overbought Territory

EUR/USD extends the decline from the monthly high (1.2150) after showing a limited reaction to the Euro Area’s Gross Domestic Product (GDP) report, and the exchange rate may continue to depreciate in the first week of May as the bullish momentum seems to be abating.

Keep in mind, the broader outlook for EUR/USD is more constructive as it cleared the March high (1.2113) to break out of the descending channel from earlier this year, and it remains to be seen if the exchange rate will continue to retrace the decline from earlier this year as the Federal Open Market Committee (FOMC) stays on track to “increase our holdings of Treasury securities by at least $80 billion per month and of agency mortgage-backed securities by at least $40 billion per month.”

The European Central Bank (ECB) may follow a similar path as the Euro Area faces a double-dip recession, with the GDP report showing a 0.6% contraction in the first quarter of 2021 following the 0.7% decline during the previous period.

In turn, the ECB may continue to strike a dovish forward guidance at its next meeting on June 10 as the central bank relies on its emergency measures to combat the downside risks surrounding the monetary union, and the Euro may face headwinds ahead of the second half of the year as “the Governing Council expects purchases under the PEPP (pandemic emergency purchase programme) over the current quarter to continue to be conducted at a significantly higher pace than during the first months of the year.”

Nevertheless, the breakout in EUR/USD may continue to coincide with the renewed tilt in retail sentiment as the crowding behavior from 2020 resurfaces, with the IG Client Sentiment report showing 37.41% of traders currently net-long the pair as the ratio of traders short to long stands at 1.67 to 1. 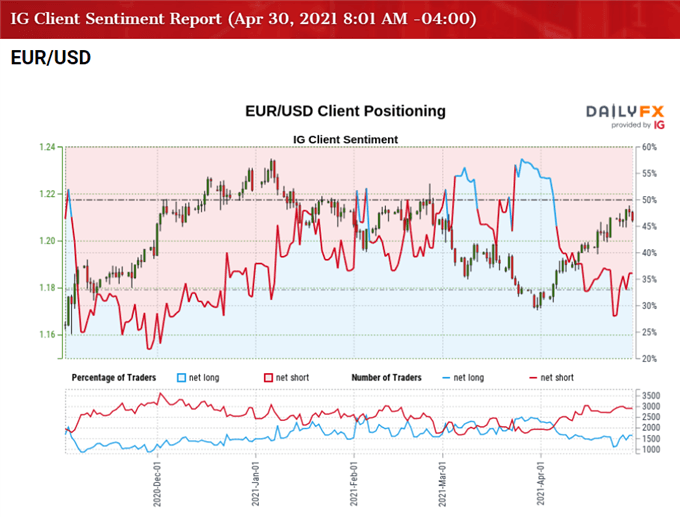 The number of traders net-long is 8.77% higher than yesterday and 8.57% higher from last week, while the number of traders net-short is 0.92% lower than yesterday and 2.22% lower from last week. The rise in net-long position has helped to alleviate the tilt in retail sentiment as only 34.68% of traders were net-long EUR/USD ahead of the FOMC rate decision, while the decline in net-short position could be a function of stop-loss orders getting triggered as the exchange rate climbed to a fresh monthly high (1.2150) earlier this week.

With that said, the break of the descending channel from earlier this year instills a constructive outlook for EUR/USD, but lack of momentum to test the February high (1.2243) may generate a larger pullback in the exchange rate as the Relative Strength Index (RSI) reverses ahead of overbought territory. 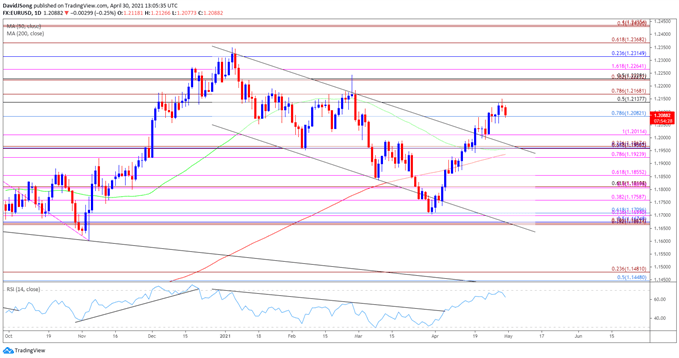