USD/CAD trades to a fresh yearly low (1.2281) as the Federal Reserve retains a dovish forward guidance for monetary policy, and the exchange rate appears to be on track to test the January 2018 low (1.2247) as the Relative Strength Index (RSI) flirts with oversold territory.

USD/CAD carves a series of lower highs and lows as the Federal Open Market Committee (FOMC) pledges to “deliver powerful support to the economy until the recovery is complete,” and the central bank appears to be in no rush to scale back its emergency measures as the economic recovery “remains uneven and far from complete.”

It seems as though the FOMC will stay on track to “increase our holdings of Treasury securities by at least $80 billion per month and of agency mortgage-backed securities by at least $40 billion per month” as the committee anticipates a transitory rise in inflation, but it remains to be seen if Chairman Jerome Powell and Co. will adjust the forward guidance at the next quarterly meeting in June as Fed officials are slated to update the Summary of Economic Projections (SEP).

Until then, the Fed’s outcome based approach for monetary policy may keep USD/CAD under pressure especially as the Bank of Canada (BoC) tapers its quantitative easing (QE) program, and the exchange rate appears to be on track to test the January 2018 low (1.2247) as the rebound from the March low (1.2365) turns out to be a correction in the broader trend rather than a shift in market behavior.

At the same time, the crowding behavior carried over from last year looks poised to persist as retail traders have been net-long USD/CAD since May 2020, with the IG Client Sentiment report showing 78.84% of traders currently net-long the pair as the ratio of traders long to short stands at 3.73 to 1. 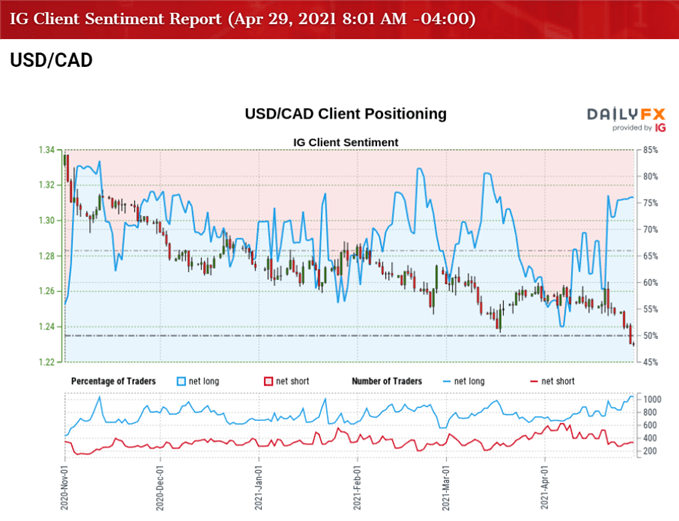 The number of traders net-long is 5.75% higher than yesterday and 23.82% higher from last week, while the number of traders net-short is 7.72% lower than yesterday and 15.72% lower from last week. The rise in net-long position has fueled the tilt in retail sentiment as 69.77% of traders were net-long USD/CAD at the start of the week, while the decline in net-short interest comes as the exchange rate trades to a fresh yearly low (1.2281).

With that said, USD/CAD appears to be on track to test the January 2018 low (1.2247) as the tilt in retail sentiment persists, and a move below 30 in the Relative Strength Index (RSI) is likely to be accompanied by a further decline in the exchange rate like the price action seen in December. 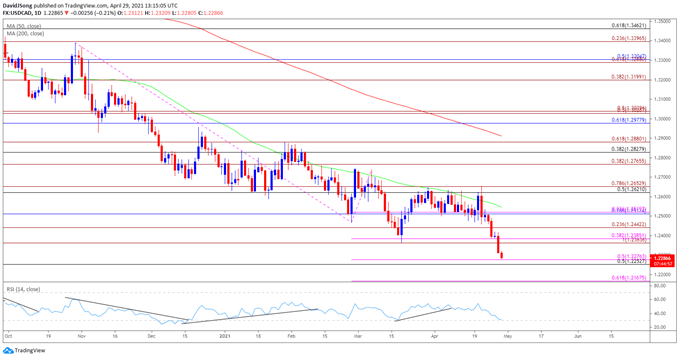